KNICKS: They Came… They Shone… Then Withered! 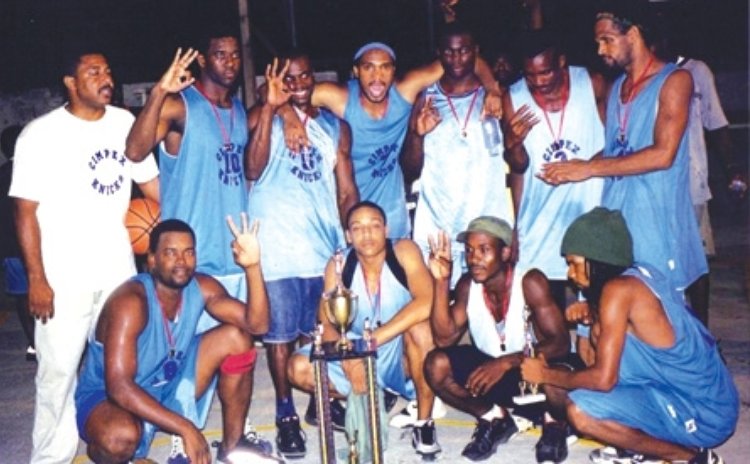 Few teams have succeeded in capturing five or more Basketball League Championship titles in Dominica since the National League began in 1966. The legendary, record-setting Cardinals proudly tops that list with 6 such championships in their first six years, plus several others later on. That short-list also includes Blazers, as well as KNICKS.

Formed in 1995, Knicks had a tight-knit core of talented Joseph brothers and cousins, most of whom resided on River Street. Those players carried interesting nicknames such as "Chinee", "John Tiko", "Léon", "Long-Kòk", "Pété-Bous" and "Toto", and all had earlier played for Lions (coached by Augustus "Toss" Williams, now deceased) and Killer Bees.

Knicks' first three years in the National League saw them "trophy-less". However, from 1998, the first year with their new coach Mickey Joseph, they stepped on to the awards podium. Knicks not only won their Zone and the Premier Division Play-Offs championships, but also copped the Most Disciplined Team Award that year.

Additionally that year, their Leeford "Chinee" Joseph was voted the League's Most Valuable Player, and Knicks had six players on Dominica's Senior National Basketball Team. Before 1998, only John Joseph had played on the national team. Knicks also wrote a couple of other short but interesting paragraphs in Dominica's Basketball history. They won back-to-back championships in 1998 and 1999, made it to the Premier Division finals in 2000 but conceded the championship to Blazers that year.

Undaunted, Knicks bounced back with a bang in 2001, then went on to achieve a "3-peat" (2001, 2002, 2003), being the only team to have performed such a feat at that time since Cardinals did their double 3-peats in both League and Knockout Championships from 1968 to 1973, followed by another 3-peat in the 1978-80 period. Thus, for the records, Knicks won 5 Premier Division League Championships in their thirteen basketball seasons!

Unfortunately after riding high on their achievements, due to some internal problems – including the resignation of their coach who took up a position on the Basketball Association's Executive in 2004 - Knicks bowed out of existence at the end of the 2007 season. Subsequently, some of the players went on to form the 'new' X-Men and Trafalgar Prowlers (Premier Division), while others returned to their original teams at Grand Bay, etc.

It should be noted though that even with Knicks strong representation on the National Team, which had a few overseas engagements during the 1998-2004 period that team toured only once, to Guadeloupe, for a few invitational games against a French Club.

As coach, Mickey employed a no-nonsense approach in directing Knicks who, during training, would run scrimmages against the team utilizing the other half of the court. They also ran plays during those sessions... And that paid off handsome dividends resulting in some of Knicks' highest game-scores being 101 pts vs Clouds, 91 vs Sonics, 90 vs Raiders, 89 vs Hoyas and 86 vs Cowboyz.

However, even with their impressive record in terms of championships, Knicks did suffer a few defeats - some in double figures – inflicted by the "big-wigs" like Cardinals, Blazers and Hoyas. But, during 1998-2003 any such losses did not deter them from their mission: Play hard in order to lift that championship trophy!

It must be noted further that Mitchel James, who played Centre for Knicks, left Dominica in 1998 to pursue studies at Dillard University in New Orleans on a basketball scholarship. Also, Kevin "Pryce" John now plays in a League in France.

During their life time, Knicks was supported by four sponsors. The first was Phia's, whose proprietor Sophie Nassief was instrumental in the naming of the team; they were known as Phia's Knicks for four seasons. The succeeding sponsors were Dame Mary Eugenia Charles, Cimpex, and finally DHL.

[Information presented above sourced from Mickey Joseph, Simon Joseph and archived newspapers. Thanks to Mickey for photo.]