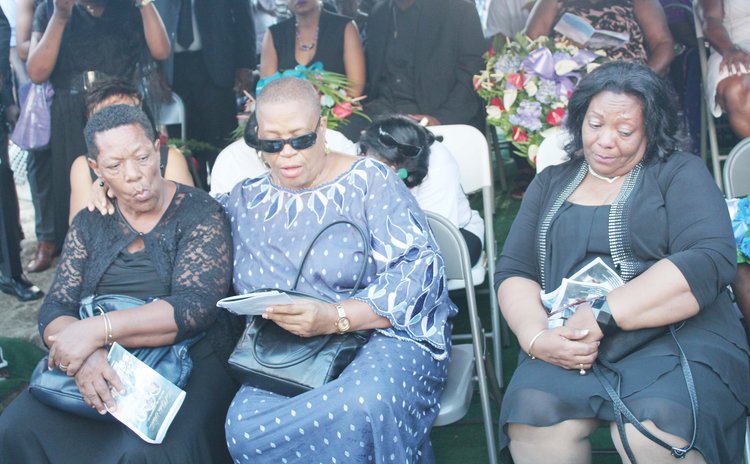 Mrs LeBruin , left, at the funeral of Kurt Matthew

Rosamund LeBruin, the mother of the late Kurt Matthew, former chief engineer at the State-owned DBS radio is crying for help one year after the tragic loss of her son.

Matthew, 48, died in a motor vehicle accident on the E.O Leblanc Highway in Canefield at around 9:15 pm on Sunday, November 26. He was struck my vehicle registration HE213, driven by Andy Esprit of Campbell, which was traveling in a northerly direction.

He sustained multiple injuries and was taken to the Accident and Emergency Department of the Princess Margaret Hospital; however, hours later, he succumbed to his injuries and was pronounced dead by a medical doctor.

"It's very frustrating heart breaking and painful as I try to still cope with his death now one year. His death has caused me to think like maybe three times like what really went wrong on the night of November 26, 2017. Now what hurts even more is that one year after his death I am stranded and stuck in no man's land not able to process his estate since I am yet to get a death certificate stating his cause of death," Mrs. LeBruin said.

She continued, "I have his vehicle at my door rusting and I can't sell or use it. His house he recently built is still under mortgage and I can't do anything. I also have other things of his which I have to deal with and require a death certificate. The banks are calling me and I am not able to move…it is very stressful and heart breaking and I have gone to the extreme and have gotten no results."

"I have been to the Registry and also to all those that matter to deal with the situation and the results are the same. Furthermore to my stress, heart breaks and torture is that the individual concerned with the death of my son has not been arrested, is a free man and at large. I need answers to the death of my son…I need closure I need to know the cause of his death, I need his death certificate, he died, I buried him. I have his children and have to deal with them. Understand my plight, my sorrow and pain; even if you see me smiling but I am in sorrow and pain and want to know how my son died; I want answers and someone needs to answer me. It is over a year now since his death," Mrs. LeBruin said.

The police say the matter is still under investigation but refused to say if someone will be charged. At the Registry not much was obtained. We were told that in circumstances such as these, to obtain a death certificate depends on "if the inquest has been completed and the Director of Public Prosecutions (DPP) is satisfied that all is in order."