Kurt Matthew is the Sun's Person of the Year

"he was my son in whom I was very, very pleased" 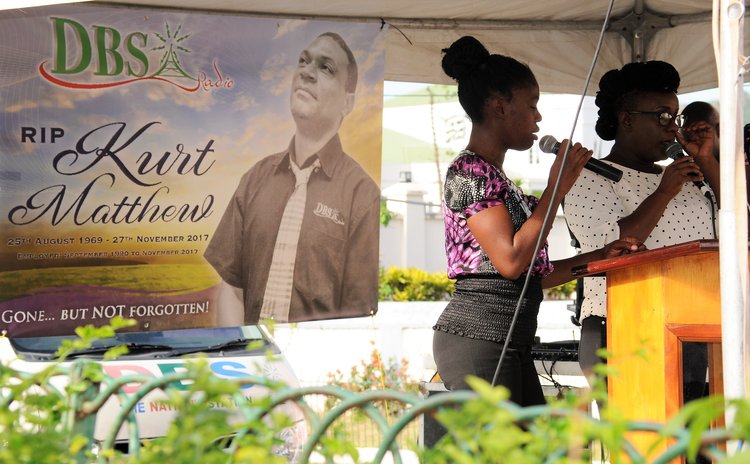 The sheer pleasure, the feeling of exhilaration that Rosemund Matthew (now Lebruin) felt when she gave birth to her son Kurt nearly half a century ago is still as indescribable today was it was back then.

"The experience was wonderful. He was the joy of my life," Lebruin says, a touching mix of everlasting pride and numbing pain in her voice.

To listen to Lebruin talk about her lost son is to take a journey through the inexpressible. Every word, every phrase, every sentence used to describe Kurt is filled with expressions of love and admiration, but none seems quite sufficient to truly tell the story of the bond between mother and child.

She had him when she was 18, and still "very innocent and didn't know about life".

"But then he was born to me and I was delighted."

Having a child this young came with its many struggles despite strong support from her parents who gave all the support possible "that allowed us to grow".

"For him," she emphasized about her struggles, "not from him."

And so, they grew up together, very much like brother and sister, with the young mum protective of her firstborn.

"From his birth to the time [of his death] we were very, very, very close. I wanted nothing bad to happen to him," she explains.

"There was a reason for his birth and God gave me the strength and energy and he grew into a fine young man."

In fact, so close were they that Kurt's younger siblings – one brother and two sisters – were convinced he was her favourite child, "not because of what I do, it's because of how close we were".

The young mother had little to give materially, but she nurtured him well, teaching him to be honest and loving and to openly share his thoughts and feelings with her, and as he grew up "he would tell me everything".

Signs of the career path that Kurt would follow were evident even before he went to the Convent Preparatory School at the age of five, and it continued through to his days as a student at the St Mary's Academy. And, not surprisingly, he attended the technical college.

He had a penchant for electrical wires and for fixing electrical appliances.

"I saw him take a can of water, a piece of wire, an old battery, the small light in a flashlight, and I saw the water spinning," Lebruin says, recalling vividly the day her young son built a whirlpool.

"He would always try to fix things - old radios, old stuff - and he would make it work."

When Kurt was about 11 or 12 years old, his mum gave him cash for Christmas so he could buy himself a present. When he came home with a set of tools she was rather disappointed.

He, too, was disappointed, but in her for not appreciating that this was what he wanted.

However, as he persisted and other people began to notice, the mum grudgingly accepted where her son's future lay, although she continued to wish he had gone into some other field.

There was the time when a man who worked as a painter at the state-owned DBS Radio – where Kurt would later become station engineer – but whose name she did not recall, told her that her son "is going to be a technician and he will be a doctor in that.

"And in my mind, I would prefer him to be a medical doctor."

His passion for technical work led Kurt to DBS where he worked as a technician for many years, before he became station engineer.

Yet, because he was such a shy person, never did his mum imagine that he would also become a disc jockey.

His friends called him Soursop, so he adopted the name DJ Soursop.

'He was very private. He was a private man. He never liked a lot of talking."

But he would talk for what seems like hours with those closest to him, such as his mum, with whom he spent four hours the day before his life was cut short in a road accident.

They were trying to build back his home, which was damaged by Hurricane Maria, but to which he had paid no attention up to that point because he had been concentrating on getting the radio station back to full capacity.

He also spoke a lot with Curtis Matthew (no relation), the news editor at DBS who was acting general manager when Maria struck.

The two had worked together for 25 years and had developed a close friendship, and on the day the storm hit they were together through it all at the station.

DBS remained on the air for several hours after other stations had gone down, and mere hours after Maria had left its unforgettable trail of destruction, Kurt had the station back on air.

He would spend the next several days getting the various transmitters up and running to ensure there was not just island-wide coverage, but Dominicans abroad could get to follow developments at home.

On the day Kurt died, the two Matthews spent about two hours in the newsroom discussing everything from the impact of the hurricane, to programming and news, and how the station could improve.

"He was a technician, but he was more than that. He was concerned about all other aspects of DBS and he wanted to see improvement," Curtis tells The Sun.

But he also said something that, in retrospect, has new, chilling meaning for Curtis.

The feeling of exhilaration has not dissipated, but it is now accompanied by a sense of deep, abiding loss, with everyone trying to understand how a man with so much to offer could be gone so soon.

Still his mum, who sometimes speaks of him in the present tense, clings on to the joy and the feeling or deep pleasure and satisfaction Kurt brought her, as well as the conviction that he gave his all to his country.

"He is a man of class. He always wanted to do his job perfect," she tells The Sun, still overcome by this combination of pride and pain.

"I praise the Lord that he had given him to me for 48 years, and he was my son in whom I was very, very pleased. My son died as a hero and he was a good citizen to the Commonwealth of Dominica."