Kurt Matthew's Mom, Rosamund Lebruin: "I was planning a huge surprise for him for his 50th birthday" 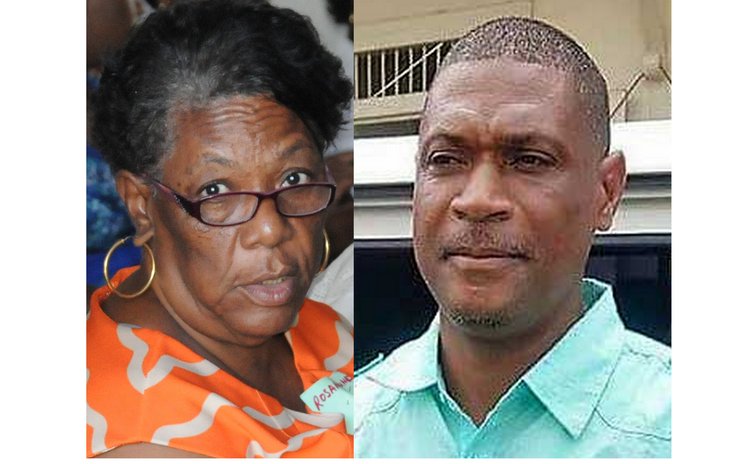 As the song says "man is lonely by birth, man is only a pilgrim on earth, born to be king, time is but a temporary thing only on loan while on earth."

This saying was again evident with the sudden passing of Kurt "DJ Soursoup" Matthew, the chief technician of state-owned DBS radio who after he was declared a hero for his work after Hurricane Maria on September 18, 2017, on November 25, 2017 died in a traffic accident.

Kurt's father, Newton "Spider" Shillingford, who almost lost his life during the hurricane faced the tragic death of his son.

"After Hurricane Maria, about 80 to 90 percent of my earnings went. My jeep, my car, my bike, my bar, my two- bedroom house, my clothes, shoes…I was left with nothing and my son Kurt is the one who gave me some clothes and shoes and lately, he has been my right hand", Shillingford said trying to compose himself.

He continued: "When I got this shocking news about his death I broke down. I went down the road to the site of the accident. It's been hard for me; I am just trying to cope… Nothing I can do but to be strong and try to get back on my feet...what else, what more, the Lord giveth and he taketh. He does not give you more than you can bear."

Shillingford described Kurt as "a kind person who gave generously with his whole heart…a hard worker who gave genuine advice to people and does not give up on his task until he has achieved."

Kurt's mother, Rosamund Lebruin of Madrelle Loubiere also spoke of her loss. "Kurt is my first son; I had him at the age of 18 years. A loving boy who was always close to his Mom and anytime he suspects that you were trying to get too close to his Mom he would have a problem with that. When I got married he was nine years old and he thought he was going to lose his Mom and so showed signs of resentment and jealousy thinking that I was going to neglect and abandon him," she said.

She recounted Kurt's life as a teenager.

"He was with me living at my Mom's home; we left when I got married. He, however, continued living with me until he became an adult but moved back to my parents home since they needed someone to be with them," Lebruin said. "My father was a joiner and he used to be with him and looked at how he was doing the work to understudy him. In fact, I remember when he made his first bench, he was proud. I was hoping he would have been a doctor or lawyer not a technical person. When you give him money during Christmas he would buy tools. Once I even scolded him telling him why he had bought tools instead of gifts…he was sad when I did but didn't respond. However, I must say that later down in life I got that answer and satisfaction as he became a technician. He was a well rounded and skilled individual and he would say to me that there was always a formula for everything; you just had to follow the guidelines," she said.

Kurt was the father of two children was also a good cook and she recounted how he would cook for them.
Kurt, she said, left her to "paddle her canoe" during Hurricane Maria since his aim was to make DBS proud and ensure that Dominicans and the world would be able to know what was happening.

"That's why he risked his life to ensure that DBS was back on air quickly. Very jovial and full of humour, you can't be sad around him. He also loved to help especially the elderly, and money was never an issue for him. He was the life saviour for my Mom and they blessed him. My other children thought he was my favorite and he thought the others were. He would always ask and I never answered, little did he know he was indeed by favorite…

"I am very proud of him. If I knew he was going to die so soon I would have told him he was also the best and I loved him even more than me.

"The news that I should come to the PMH had me sad and frantic. His passing is not a nice one for me. I am yet to resolve it, and it's disturbing. I had lots of plans for him. I was planning a huge surprise for him for his 50th birthday. But God had other plans. He is now in a better place where there is no more pain or sorrow and so I now have to accept that and live my life," she said.