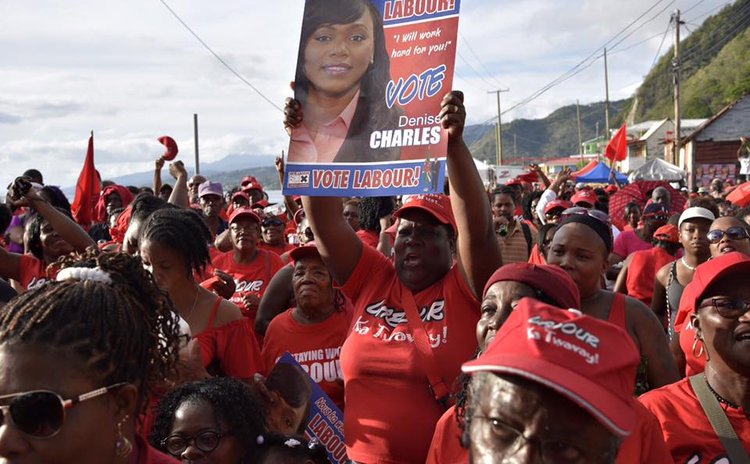 A supporter holds up a poster of the DLP candidate

On a mission to recapture Soufriere, Dominica's red army invaded Pointe Michel on Saturday when the ruling Dominica Labour Party (DLP) launched Denise Charles, its candidate for the 7 June 2016 by-election.

There's no doubt that by deploying its well-oiled election machinery Labour gives the impression that it wants to win and retain the seat vacated by Ian Pinard on 26 April after he became embroiled in controversy over a charge of an inappropriate involvement with a minor.

Labour wants to win because losing or giving up ground, would embolden an opposition that suspects the DLP political elephant is becoming old and weak. Hence the show of strength.

But Prime Minister Roosevelt Skerrit told his supporters that the Soufriere bye-election is just what it is: a by-election.

"We have come to Pointe Michel tonight to tell the people of Point Michel this is a bye- election...not a general election," Skerrit said during a speech at the Pointe Michel rally. "This is not about party and it is not about helping to choose a government. You are going to the polls on June 7th to elect a representative".

But Charles sees disaster ahead if her supporters adopt a "we-win-already" attitude and jeopardize her path to Parliament and the Cabinet of Prime Minister Skerrit. Voter turnout at bye-elections worldwide are notoriously low.

"Make no mistake, sisters and brothers, this election is an important one," she said "There are many who are saying that Labour is already in government with a majority, so there is no need to go out and vote. But I say to you today, as many who are saying that, there are others on the Opposition side that will go out and vote for their candidate so that Labour will be one seat down."

But Charles is correct; voter apathy, voter abstention, voter fatigue, protest votes (or a combination) can cost her the by-election although it is difficult to see how Hidges Adams, the United Workers Party (UWP) candidate, can erase a 500 vote deficit in less than a month. (In the December 2014 general election Pinard defeated Adams by 1326 to 822).