Members of the ruling Dominica Labour Party say they are concerned - a delegates' conference is overdue by four years. 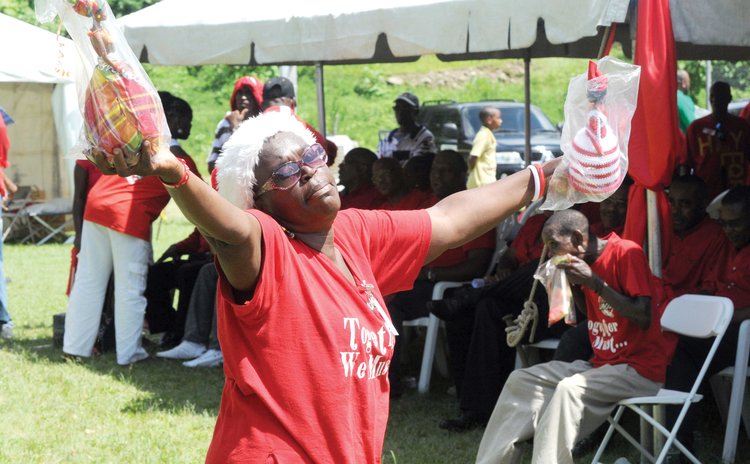 A DLP supporter at the 2013 rally in Pointe Michel

Loud rumblings can be heard within the belly of the ruling Dominica Labour Party (DLP), the Sun can report.

Members say they are upset over the unusual long delay in holding delegates conferences which according to the DLP's constitution should be an annual affair.

The last one was held four years ago, in Pointe Michel in September 2013. At that conference, a resolution, read by Edward Registe, general secretary, ensured that the entire executive was returned unopposed for one year.

"The executive of the party doing what they want," a top member of the DLP, who requested anonymity to be able to discuss the issue, told the SUN. "The year has come and gone, we are now well passed that and they (the executive) are playing football with the delegate's conference."

But in response, another top party official revealed that the DLP expects to hold a delegate's conference towards the end of 2017.

He added: "It went to a vote at Goodwill School to put the matter in care of a management team. All the 21 constituencies have to put in their nominations. But for now nothing has happened," the source said.

Asked if he expects changes in the executive whenever a conference is convened, the source said the position of deputy political leader, held by Ambrose George for more than a decade, will be up for grabs.

"He is not expected to put his hat in the ring since he won't be a candidate for the next elections, but with the way things are going expect anything, it will be difficult to keep those who want to be on the executive out, I promise you it will be fireworks," the source said. "We are waiting on the management committee to set the date for the delegate's conference and the place, to be ratified by the executive who it seem like they don't want to leave office."

Meanwhile, the opposition United Workers Party (UWP) is expected to hold its delegates conference in January 2018 when observers expect several challenges to the position of party leader now held by Leader of the Opposition Lennox Linton. The UWP last held a "special delegates' conference" in 2016.

Additionally, nominations for the post of Deputy Leader previously held by Joshua Francis will be highly interesting since Francis was stripped of that post on 24 April 2016 following allegations of inappropriate behaviour with a minor. Reportedly estranged from the party for months since then, Francis has apparently been welcomed back into the fold.