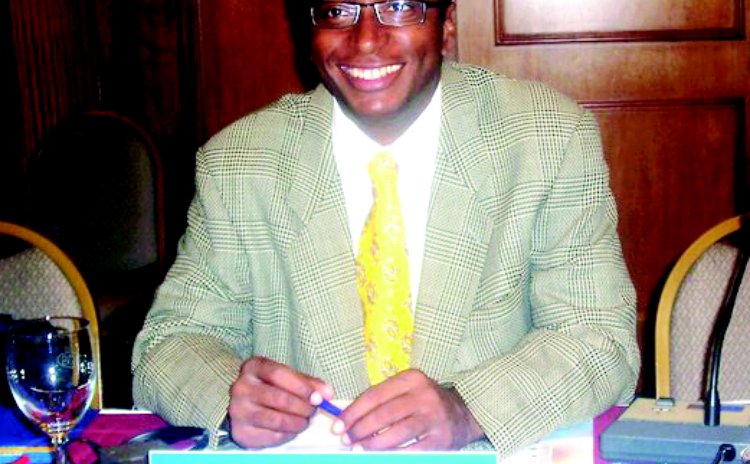 Sean Douglas at a conference in Uruguay

For most of its 59-year history, the Dominica Labour Party has identified with the struggles of oppressed peoples. In 1971, while still an Associated State of Britain, under the leadership of Edward Oliver Leblanc, Parliament approved ECD$10,000 as a contribution towards the liberation struggle in South Africa. In 1979, the Oliver Seraphine-led interim government formally recognized the Polisario Front. Today the Roosevelt Skerrit administration has departed from the position taken on Western Sahara by Oliver Seraphine, Eugenia Charles, Edison James, Rosie Douglas and Pierre Charles.

Rosie Douglas fought for self-determination and political independence for African and Caribbean peoples. He was unwavering in his support for the African National Congress and was instrumental in the campaign to end apartheid in South Africa. Rosie identified with liberation struggles in Canada, the United States, Northern Ireland, Australia, New Zealand and throughout Latin America. Pierre Charles, in opposition and in government, also identified with many of those struggles.

Despite the Labour party's rich history of solidarity with oppressed peoples around the world, the Skerrit regime has withdrawn Dominica's long-standing support for the Polisario Front. The Polisario has been engaged in a 40-year conflict with Morocco for self-determination in Western Sahara.

An article which appeared in the ruling party's new propaganda mouthpiece, 'The Chronicle' some weeks ago, penned by 'Vigilante' captioned "Beware UWP and Polosario Dollar Diplomacy" contained a plethora of inaccuracies on the Western Saharan issue. Senior Counsel (SC) Anthony Astaphan and Attorney Lennox Lawrence also used DBS news and Kairi FM to spread their misinformation to an even wider audience.

Western Sahara, a former Spanish colony, is a vast desert territory in north-west Africa. In 1975, a deal partitioned the region between Morocco and Mauritania. In February, 1976, the Polisario Front, declared the Saharan Arab Democratic Republic (SADR) and announced its first government in March of the same year. Western Sahara is now divided between Morocco in the West and the Polisario Front in the east. Over 100,000 Sahrawi refugees currently live in UN-run camps in Western Algeria.

Vigilante claims that Western Sahara is part of Morocco. The writer suggests that the United Nations supports Morocco's claim to Western Sahara.

This is historically inaccurate. In 1975, the International Court of Justice rejected territorial claims by Morocco and Mauritania. The court recognized the right of the people of Western Sahara to self-determination.

After a guerilla war which lasted nearly 20 years, both sides agreed to a ceasefire under the aegis of the United Nations Security Council in 1991. There have been numerous efforts aimed at finding a lasting solution to the conflict led for a time by a former US Secretary of State, James Baker, and now by the present UN Secretary General's envoy to Western Sahara, Christopher Ross.

Vigilante also says that ninety-six per cent of the countries of the world recognize the Sahara region as "a department of Morocco". This is totally false. Morocco has no legal or historic claim to Western Sahara. The Polisario Front has observer status at the UN. The UN does not recognize Morocco's claims as Western Sahara remains on its list of non- self-governing territories. The United Nations has repeatedly demanded that the residents of Western Sahara be allowed to vote on their own future. Much to the displeasure of Morocco, the United States has called for an expansion of the mandate of the UN peacekeeping force in Western Sahara (MINURSO) to include human rights.

SADR is a full member of the African Union and Morocco is not. Cuba, Venezuela, Nicaragua and Bolivia, as the leading members of ALBA and the majority of Community of Latin American and Caribbean nations (CELAC) support the Polisario Front. With the exception of the six OECS countries, Jamaica, Guyana and Trinidad support the Polisario/SADR. The Polisario Front is an observer member of Socialist International and opened its embassy in Guyana last November.

The silence of the Roosevelt Skerrit regime on the treatment of the Sahrawis by Morocco is an abject betrayal of the work of Rosie Douglas- a man who devoted much of his life fighting the causes of oppressed peoples particularly in Africa. Human Rights Watch (HRW), in its World report 2014, laments the continuous violation of human rights by Morocco in Western Sahara. The report states that Moroccan courts sent Sahrawis to jail after "unfair trails" and added that the Moroccan police used "excessive force" to break up peaceful demonstrations and the authorities "repressed supporters of self-determination".

Recently a Spanish forensic team examined the remains of six adults and two children found in mass graves in the Moroccan occupied section of Western Sahara. It is being suggested that in seizing the area in the 1970s, the Moroccans may have captured and killed hundreds of Sahrawi civilians.

Contrary to the view being perpetrated by Anthony Astaphan, the Polisario categorically rejects terrorism as a legitimate means of achieving its goals. The ceasefire of 1991 has largely been observed. In its literature, the Polisario describes its struggle as a "clean war of liberation".

The Skerrit government's position on Western Sahara is an abandonment of the Dominica Labour Party's long-standing support for liberation struggles across the world. The Skerrit government has abandoned principle and high ideals for short-term benefits from Morocco. This policy change is a major retrogression which Rosie Douglas and Pierre Charles would never have embraced.