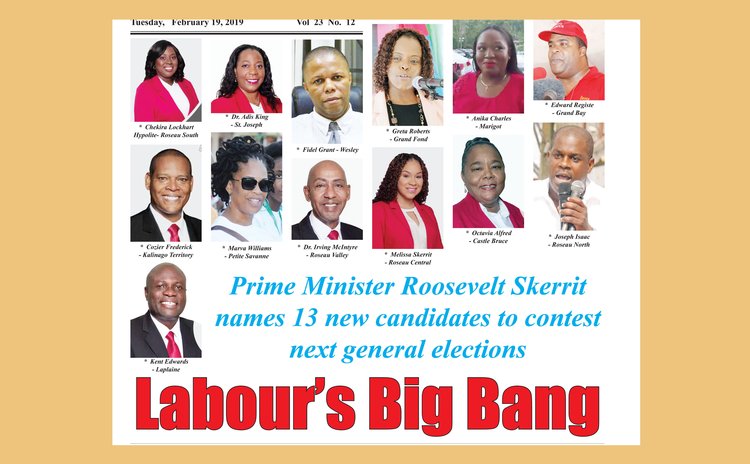 New candidates of the Dominica Labour Party announced at Londonderry

At a special delegates conference on 17 February 2019 at Londonderry on Dominica's north east, Prime Minister Roosevelt Skerrit, the political leader of the ruling Dominica Labour Party (DLP) announced some sweeping changes to the list of candidates that may help the DLP win an unprecedented 4th term in office at the next general elections constitutionally due in 2020.

It was a bold move (some say desperate) as Skerrit himself senses that Dominicans feel a need for change.

Casualties of the DLP's sweeping changes are Housing Minister, Johnson Drigo; Education Minister Petter St Jean; Youth and Sports Minister, Justina Charles; Health Minister, Kenneth Darroux and Minister of Kalinago Affairs, Dr. Cassius Darroux. They are all current parliamentary representatives. Joseph Isaac, who jumped ship in 2017, was moved to the relatively affluent Roseau North constituency from the seat he won for the opposition UWP, the valued seat of Roseau Central.

These are the major changes announced by Prime Minister Skerrit:

Here are the 21 candidates to represent the Dominica Labour Party (DLP) at the next general election constitutionally due in 2020; the first eight listed below are unchanged from the 2014 election; (Denise Charles won the Soufriere seat in a by-election in 2016):