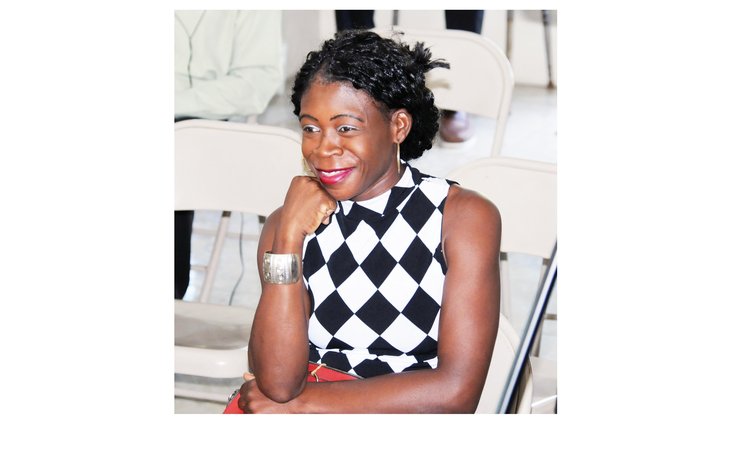 With the spirit of carnival swirling around her, Vernice "Lady V" Joseph has become Dominica Calypso's newest sensation.

"I find de song make a hit. I didn't expect de song to make such a hit," said Lady V as she sat for a talk with The Sun last week that was sandwiched between two interviews she had with two radio stations. Her rapid popularity was awesome.

In fact "De Spirit" was such a "hit" that Vernice was considering taking a break from the spotlight.

"Imagine my mouth so tired I have to stay at my home tomorrow," she said in a good-natured protest. "Everybody keep asking me 'come a while, come a while."

The 37 year-old Fond Cole mother-of-two introduced "De Spirit" at the Calypso Eliminations a couple weeks ago and although she did not qualify for the Quarter Finals nonetheless her audience went crazy.

What Calypso fans wanted more of was a simple but jumpy song; Bouyon king, Rah Peters, helped Vernice to add music to the lyrics.

I have a little problem

Have to take out de spirit

That preventing me from making it

I doh win no Lotto

I doh own no motto

I have no tablet

I doh have no salary

I doh have no money

I doh have no hotel

Soukouyan, what you grudging me for

Vernice says the lyrics for "De Spirit" reflect her life experience, especially during the birth of her second child when she felt the effects of obeah, evil spirits and jealousy.

"When I really believe it really have evil on that earth is when I was having my second child," she said. "I was getting pain, pain, pain and during my delivery I almost die. Thank God I'm alive".

Vernice is of the view that obeah and the invoking of evil spirits is widespread in Dominica and "it have some people, they are Christians, and they that in the heart of it."

But Lady V is not the first Calypsonian to sing about the impact of this phenomenon in Caribbean culture. Remember the Mighty Sparrow's classic "Obeah Wedding" which told the story about a woman named Melda who apparently tried using the power of evil spirits to influence Sparrow to marry her.

Up and down the country looking for Obeah, and your perspiration smell so strong, well...

And you can't trap me with necromancy

All you do can't get through, I still ain't go marry to you

The amount of incense that you burn at night, Lard and Garlic stinking up me place

So much different color candles that you light, rubbing red lavender in your face, well...

Grenadian sociologist Nathaniel Samuels Murrell supports the view that obeah is widespread in the Caribbean and writes in "Afro-Caribbean Religions" that Caribbean people seriously believe that "mysterious and powerful forces inhibit the world and they can be seduced to work for the benefit or harm of a needy individual."

For example, Lady V, apparently, is a firm believer that evil spirits exist but, "doh mind dat", she is protected by her faith.

"Sometimes you see them on the road looking spick-and-span and they that in the heart of it," she said. "Sometimes it is to break you down, to do you evil, to do you bad for you not to succeed on the earth. They would see something good coming out of you and they would say 'I goin' to mess you up'".

But does it work?

"Well, it cannot work with me because I am a blessed person", she said.