Larocque sisters: "We have never experienced all the crazy twin stuff"

"Twins on Twins"- THE SUN Special Features. By Ronalda and Ronda Luke 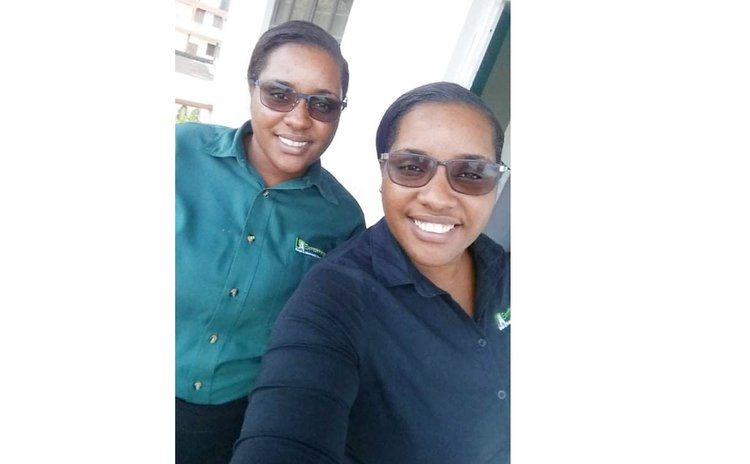 Identical twin sisters Marissa and Melissa Larocque say although most people frequently comment on their similar appearances they are adamant that they are not identical.

The 30-year-old Portsmouth natives told The Sun, efforts on the part of many to emphasize their similarity can sometimes be galling, and, as such, this has left the twins craving their own identity.

"To us, we don't look alike but people mix us up a lot. I really don't know how they don't see the difference," Melissa said.

Marissa added: "There are times I would go somewhere and people would ask, "not you that just came there," and I would have to explain several times that it wasn't me and that sometimes cause me to get aggravated."

Though the twins say they long for their own identity, the pair live together and admitted that much of their interests, dislikes, and personality are the same. Marissa the eldest, however, admits that Melissa has always been the "bossier" twin which they say is a major differentiation between them.

"Well, she [Melissa] has always been bossier from since we were small and even to this day. We still fight a lot especially over our children but in the end, we always make up," Marissa said.

Despite their close connection, the Larocque twin claims no special empathy or telepathic abilities which most twins profess to share.

"I have a very close connection with my sister, for me growing up with a twin was very good because I had someone there all along but we have never experienced all the crazy twin stuff that you hear about," Melissa said.

Marissa added: "I am close to her too but I have never felt her pain nor have I ever been able to read her mind. If she is hurt, I will feel sad after I know what happens but that's as far as it goes."

Notwithstanding their reported disadvantages, Melissa and Marissa say there are advantages to twinship as they sometimes get to take on different identity roles.

"Everyone says we look alike so we sometimes use that to our benefit. At times we pretend to be each other so we can do things on the other person's behalf so that is one of the benefits of being a twin who people say looks alike," Marissa said.

Coming from a family of twins as their mother is a side of the twin, the girls each say they hoped for doubles during their pregnancy but that was not the case.

The sisters say that despite their constant bickering or want for a separate identity, they are inseparable and like a simple glove or a door without a handle, one without the other seems fairly useless.