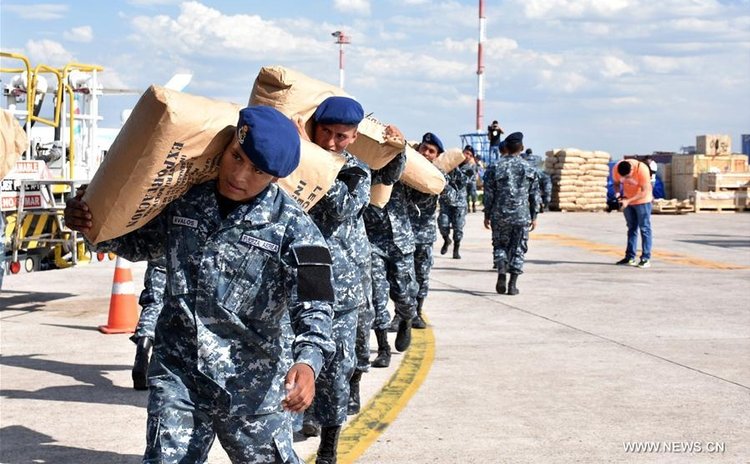 MEXICO CITY, Oct. 8 (Xinhua) -- Several governments in Latin America have expressed their solidarity with Haiti and have offered humanitarian aid after Hurricane Matthew caused over 800 deaths and significant material losses in the Caribbean nation.

Food, bottled water, mattresses as well as machinery to remove rubble and medical staff form part of the convoys that different Latin American countries have sent to help the island.

Venezuela was one of the first nations to take action and sent three lots of humanitarian aid, the last of which was sent on Friday and contained 660 tonnes of food, medication, water, blankets and mattresses. The batch also included 450 tonnes of heavy machinery to remove rubble and rehabilitate roads.

Cuba, despite also suffering at the hands of Hurricane Matthew, announced on Friday that it would send "38 doctors specialized in facing disasters" to Haiti.

The group will be made up of members of the "Henry Reeve" International Contingent of Doctors Specialized in Disaster Situations and Serious Epidemics.

Mexico is also playing its part and standing in solidarity with the island nation. President Enrique Pena Nieto said that "Mexico regrets the pain and loss of human life that the people of Haiti are suffering."

The president said that "humanitarian support and aid during the relief and recovery stage" will be sent from Mexico.

Mauricio Macri's government in Argentina also informed that they had mobilized the Argentine blue helmets that participate in the United Nations (UN) peace mission in Haiti (Minustah) in order to collaborate with humanitarian aid in the southern part of the Caribbean nation.

In a press release, Argentina's defence ministry said that "25 out of the 76 men and women that work in the Argentine Air Force's mobile military hospital, located in Port-au-Prince, are already enlisted to help."

Bolivia's president, Evo Morales, expressed his sympathy for Haitian people and government on Saturday and blamed global warming for the natural disaster.

"I want to take advantage of this opportunity to express Bolivia's solidarity with the Haitian people," said Morales during a public ceremony.

According to Bolivia's president, global warming is causing devastating effects in several countries in the world with different climatic incidences such as droughts, heavy rains and hurricanes.

Costa Rica, Brazil and Uruguay also feature in the list of countries that have expressed their sympathies to Haiti and through their foreign ministries they have offered their support to the Caribbean island while expressing their deepest regret at the loss of life caused by the natural disaster.

In Haiti, around 20,000 houses were destroyed, over 15,600 people were evacuated and the death toll could reach over one thousand, once the problems surrounding communication, electricity and roads corroborate the magnitude of the damage, according to figures from the United Nations Office for the Coordination of Humanitarian Affairs (OCHA).