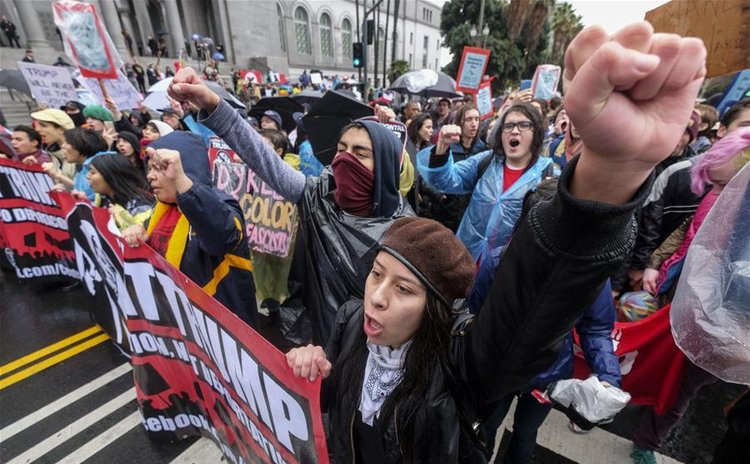 People hold a protest against the inauguration of Donald Trump as the new U.S. president, in Los Angeles Jan. 20, 2017

BUENOS AIRES, Jan. 22 (Xinhua) -- U.S. President Donald Trump's inauguration is no good news for Latin America, as his policies will impact nearly every sector and harm countries in Central America and the Caribbean, according to regional observers.

Trump, who took oath for office on Friday, plans to implement protectionist policies to shield U.S. industries from foreign competition, and isolationist measures, including building a wall along the border with Mexico to keep out illegal migrants.

"For Latin America, Trump's ascension (to power) is not good news," said the expert on U.S. affairs and coordinator of a working group on U.S. studies at the Latin American Social Sciences Council, a non-governmental research institute based in Buenos Aires.

The region will be particularly hard-hit by Trump's proposal to finance the border wall by taxing the billions of dollars that Latin Americans working in the United States send back home in remittances, he noted.

"Trump's pledge to limit remittances will harm countries in Central America and the Caribbean," which are closer to the United States and have large populations of migrants working there, said Morgenfeld.

However, countries as far south as Argentina will also feel the impact of a Trump presidency, he said.

"We also foresee new difficulties for the government of Argentina," said Morgenfeld, noting Argentine President Mauricio Macri had been pursuing a policy of forging closer ties with Washington under Trump's predecessor Barack Obama.

"Trump's arrival represents, among other things, a crisis of neoliberal globalization, which Macri's government belatedly aspired to form stronger links with," said the political observer.

Amid those uncertainties and worries brought by the inauguration of Trump, some local analysts suggested that countries in the region turn eastward and seek more trade opportunities with other countries, notably China.

China can become a key partner for the region, based on their complementarity, and in view of the uncertainty ushered in by Trump's rise to the presidency, said Trotta.

"In a hyper-connected and interdependent world ... it is not yet clear what position the world's leading economy will adopt under Trump. The challenge is to ensure that Trump's 'successes' don't imply a tragic outcome for the rest of the 7 billion people that comprise humanity," Trotta said.

"Protectionist policies by the world's leading import market will spark a crisis within the WTO (World Trade Organization) and generate a schism in various economies," including China, Canada, Mexico, Japan and Germany, said Trotta.

While Latin America is likely to suffer the consequences of Trump's policies, it could also take advantage, said Trotta.

"The Trump era can be an opportunity for our Latin American countries. We have always fared better when the U.S. has focused its attention elsewhere. A closed United States, looking inward at its own problems, could present an opportunity to strengthen the region's process of integration," said Trotta.

A U.S. policy that neglects or alienates Latin America could lead the region to "play a larger role in building a more plural and democratic world order," he said.