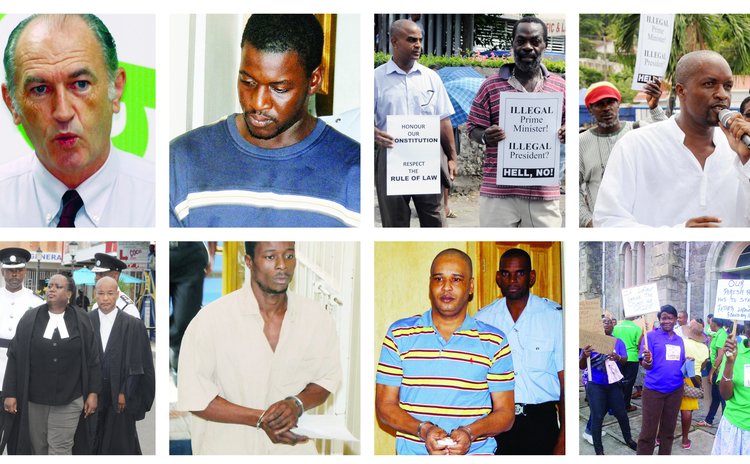 Long search for a DPP

One would think that the Government would have looked inward before searching outward for a Director of Public Prosecution to replace the retired Gene Pestaina. But surprise, surprise.

The Government tried two foreigners; both turned down the job offer. Then, in near desperation, the officials finally turned to Dominican Chief Magistrate Evalina Baptiste to fill the post of DPP.

Early in 2013, Guyanese Paula Gilford was offered the position but she withdrew allegedly over the details of her contract. Lawyer Julian Prevost held the post of Acting DPP for a few months while Pestaina was on pre-retirement leave.

Gilford along with the Antigua-based Dominican magistrate and former police officer, Asquith Riviere, and Celia Delauney, was interviewed by the Ministry of Legal Affairs for the position.

Then Baptiste applied for the post, was short-listed and interviewed but she did not find favour with the State; the officials opted instead for another Guyanese, Kirt DeFreitas. Soon afterwards, Attorney General Levi Peter announced at a press conference that DeFreitas decided to stay home because comments about him from bloggers were "dirty and mischief making."

DeFreitas added that had this been an appointment for any other post he would have simply ignored them for what they are- untrue, unfounded and malicious.

In November, the Ministry of Legal Affairs announced that Baptiste would now fill the post.

The trial of Edward "Al Capone" Green was by far the most intriguing trial of the year. Green, 70, of Morne Daniel was on trial for the murder of Damian Dorival, 35, of Roseau in 2008. It was alleged that Green shot Dorival at Morne Daniel, then beheaded him, drove to Roseau and threw the headless body in a garbage dump near Elmshall and the victim's head in the river near Copthall.

The case, which begun on June 17, 2013 had gone on for 12 days over five weeks. The jury heard evidence from 31 witnesses including one by the defence, listened through more than six hours over two days of addresses (by Keith Scotland of Trinidad and Tobago for the prosecution and Darius Jones for the defence, and summation of the evidence by trial judge Birnie Stephenson); then after three hours of deliberation the jury decided that Green was guilty of murder.

Green did not have to make a defence. His position was that he is innocent. Before the verdict, he addressed the court from the Prisoners' Dock for about 55 minutes.

"Earl Grant is coming home, whether he wants to or not", the Sun reported in early 2013. "If he's coming home by his own free will he should be here sometime before May 31st. Otherwise law officials in Dominica will ask United States to send him home to answer questions from the police. That's according to Julien Prevost, the new Acting Director of Public Prosecutions (DPP)." "We would like to put him on notice that unless he comes willingly to the country before the end of the month, I will be seeking the assistance of the Attorney General to have him extradited to Dominica," Prevost told the press. "If he has nothing to hide, nothing to fear, he can come to the Police. I hope that we can make progress on that case before my stint is over."

Grant was wanted to answer questions related to the firebombing of the home of former Magistrate G.O.N. Emanuel. But when he came home and was charged, Chief Magistrate Eveline Baptiste denied bail; ; Denny Shillingford was also charged with setting fire to Emmanuel's home on December 25, 2010.

Shillingford's bail issue was easy; he was serving a jail term for another matter.

One day later, High Court Judge Bernie Stephenson ordered magistrates to grant bail to Grant. He was granted bail in the sum of EC$20,000 with two sureties; he is to reside at the home of his mother, Mariana Cuffy at Church Lane St. Joseph, and report to the St. Joseph Police Station every Monday, Wednesday and Friday between the hours of 7am and 7pm. Grant was also ordered to surrender "all his travel documents".

In 2013, Dominica received a new high court judge in the Civil Division, when Justice Brian Cottle was transferred to Antigua. He was replaced by Justice Errol Thomas.

Justice Cottle of St. Vincent and the Grenadines was appointed resident judge here on Tuesday September 1st, 2009 replacing Justice Davidson Baptiste who was moved to the Eastern Caribbean Court of Appeal in an acting capacity. Baptiste has since been confirmed in that post.

Dozens of parishioners gathered outside the Roman Catholic Church to support a parish priest who has been accused of molesting a girl nearly two decades ago.

Catholics in Grand Bay held cardboard placards saying "Our parish priest has to stay" and chanting their support for Monsignor Reginald Lafleur, who they referred to as "Father Reggie."

The 59-year-old priest was put on administrative leave after a woman alleged that he touched her inappropriately 19 years ago when she was a 12-year-old parishioner. The woman made the accusations against Lafleur in a series of letters to Bishop Gabriel Malzaire, the head of the diocese.

Malzaire sent the accuser to Trinidad & Tobago for counselling as a local church panel investigated her allegations. Unable to decide on the issue after many months Bishop Malzaire has referred the matter to Rome. LaFleur awaits his fate.

Kidnapper Gets Nine Years in Jail

Resident judge Justice Birnie Stephenson sentenced kidnapper/rapist Webster Edmond, 33, of Layou to a maximum 12 years in prison when he appeared for sentencing at the Roseau High Court on Friday March 15, 2013.

Edmond's charges were kidnapping a 15-year old girl to a secret place and confined against her will on Thursday February 17, 2011; unlawful sexual intercourse between February 17, 2011 to March 28, 2011 and possession of ammunition and a shotgun.