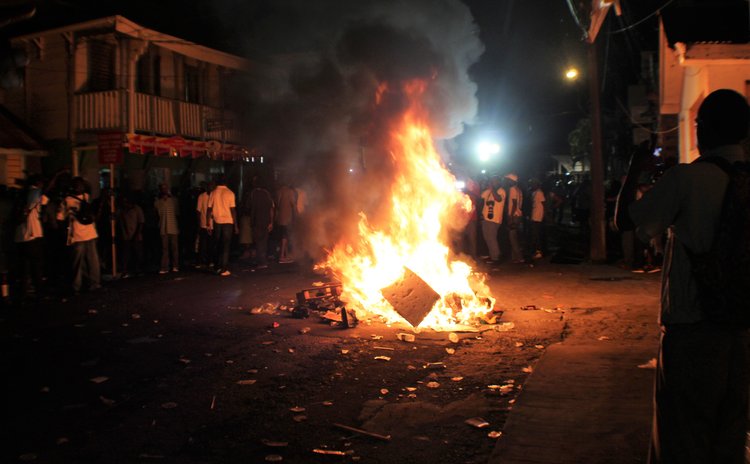 Burning in the streets of Roseau after the UWP February meeting

A few hours after the opposition United Workers Party (UWP) ended a passport-protest meeting in Roseau on 7 February, police used teargas to disperse roaming young persons who were sporadically setting fire to garbage cans in the streets and breaking and entering and setting fire to businesses.

Earlier many hundreds protested against the management of the Citizenship by Investment (CBI) programme at a meeting near Government Headquarters on Kennedy Avenue in Roseau.

At the meeting speaker after speaker demanded the resignation of the government of Prime Minister Roosevelt Skerrit over the mismanagement of the CBI and the sale of diplomatic passports to persons who later got into problems with the law. They said the programme had tarnished Dominica's name around the world.

Claims of an Attempted Coup

A day later, Prime Minister Roosevelt Skerrit, in an address to the nation on national radio, suggested that the opposition had attempted to overthrow his government by using a truck, laden with sound equipment, to ram into the Financial Centre, the main building housing government's offices and the office of the Prime Minister.

But subsequently, the Sun reported, Jamaican detectives who were hired to investigate the alleged plot reported that there is no evidence of an attempted coup. Following the events of 7 February 2017 local police arrested, interrogated and subsequently released four members of the opposition whom they claimed we somewhat involved in the disturbances and the alleged plot to overthrow the Skerrit Government.

But the matter was not yet over. While the case against Dr. Sam Christian of the Dominica Freedom Party (DFP) is still pending, a Roseau magistrate in April dismissed the case of obstruction, during the 7th February UWP meeting, against Adam Sanford, the former United Workers Party (UWP) deputy political leader because of a lack of evidence.

Police had arrested Sanford, a Dominica State College (DSC) lecturer, at his home in the early morning of February 15, 2017; afterwards he spent more than ten hours in police custody.

Sanford and his legal team said that they were in the process of filing documents to sue the police for wrongful arrest.

Rudy Junior Jones of Marigot was found guilty by a jury of two men and seven women for murdering 39-year old Falcon Wallace at Dam, Marigot on August 25, 2012.

The state's case was built on the evidence of 12 witnesses, two of whom were unable to give evidence in person, over seven days between Thursday May 11 and 29, 2017. Meanwhile, Dominica, and a number of other islands of the Organisation of Eastern Caribbean States (OECS) forming the sub-regional court system were owing the Supreme Court millions of dollars in back contributions.

Of the nine member countries that make up the Supreme Court, none owed the court as much in dues as the nearly $8 million that Dominica did.

Figures obtained by The Sun revealed that the Roosevelt Skerrit administration was indebted to the court to the tune of $7,522,576 as at January this year, $131,588 more than the $ 7,391,018 it owed in December 2016. While commentating on these revelations Prime Minister Skerrit said the Sun's report was fake news and demanded a retraction.

In the meantime, by the end of 2017 a Dominican organisation, the Builders and Contractors Association of Dominica (BCAD), was blaming the High Court's tardiness for Government's decision to give another major contract to a Barbadian firm.

Justice delayed may be justice denied but surely, according to BCAD, the court's slowness was causing more contacts to go to foreigners and even massive projects like the building of 1000 houses in post hurricane Maria-ravaged Dominica.

Recall that after Tropical Storm Erika in 2015 the Government signed an EC$18 million contract with a Barbadian firm to build the Roseau West Bridge and river-retaining wall.

Just before construction began, the BCAD said Government had violated the law by signing the contracted without undertaking the tendering process. The matter is still under judicial review, that is, the case is still at the preliminary stage. The firm has completed the bridge.