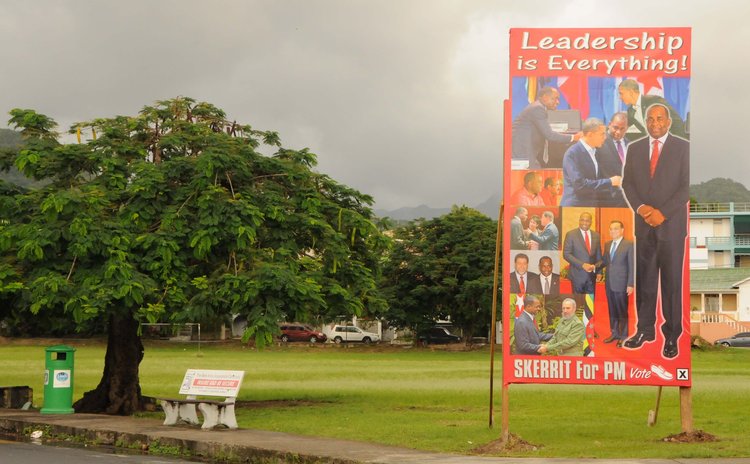 It was Skerrit himself who declared that there is no need for opposition in Dominica. His soon-to-be appointed Attorney General called for the assassination of three people who served as leaders of the opposition UWP. Two hired mercenaries invaded the property of the Leader of the Opposition with the complicity and assistance of the Commonwealth of Dominica Police Force.

At least eight prominent opposition members are being persecuted in court on trumped-up charges of incitement.

A clear plan to eliminate all opposition forces in furtherance of the ALBA agenda of a one-party state.

In this most critical COVID-19 pandemic crisis, Dominicans are acutely aware of the value of a functioning and fearless opposition. The carelessness, callousness, and incompetence of this administration in the face of this latest surge of the virus is most alarming. There can be no doubt that the actions of senior leaders of government have contributed significantly to that surge. What is the evidence?

• Skerrit returned from a high-risk country, refused to observe protocol, and lied about it IN THE PARLIAMENT

• There have been many cover-ups of the relevant information to the public.

The Leader of the Opposition was ridiculed by government parliamentarians when he urged them to wear masks.

Now, these same delinquents blame young bikers for the spread and threaten to jail them; they impose five thousand dollar fines on poor and struggling people and, without notice, lock farmers out of selling their produce. Hypocrites! The people got reprieved only on the intervention of the opposition and the Q95 radio station.

There is still work to be done. Those affected must demand appropriate compensation for the loss of income suffered as a result of the Curfew Order. This is provided for BY LAW.

The conspiracy to keep the opposition out of parliament on July 29 was designed to prevent Lennox Linton from further exposing the misappropriation of the people's money.

In executing his sinister plan the leader of the government, who is 'everything', exposed the stupidity of both Joseph Isaac and kASSini Laville. They were used to do his dirty work while, like Pilate, he washed his hands and absented himself from the parliament.

So Skerrit's hands appear clean while those policemen who illegally assaulted Hector John and Danny Lugay are now exposed to criminal and civil liability. Leadership is everything even when it is leadership from behind!

The parliamentary opposition presented their budget response via social media. A key aspect of their presentation was the need to reduce the oversize cabinet. What is the value and justification, they asked, for an eighteen-member cabinet when all ministers get up in the parliament to 'deal with matters standing in the name of the prime minister'? They never have any matter dealing with their own portfolio to present to the parliament. What a mockery!

The parliamentary opposition also exposed the folly of Skerrit's phantom international airport. An airport to be built with no 'cents' and no 'sense'! With no financing plan, no designs, no market studies, no environmental impact assessment.

Oh, Leadership, once Everything. Now reduced to Nothing!