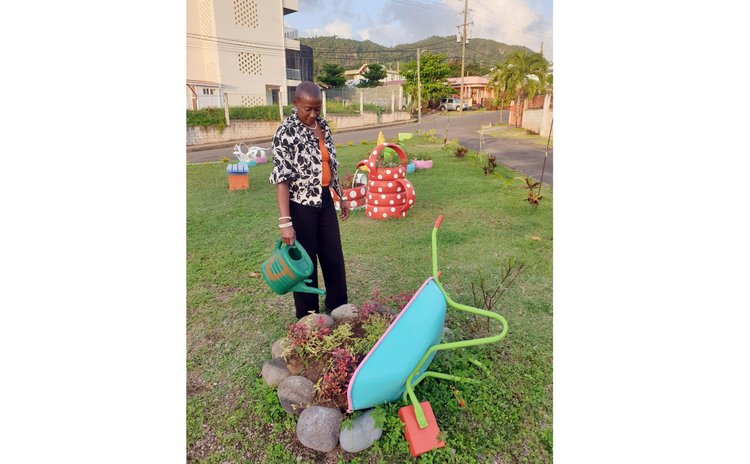 Residents of upper Goodwill once again have a green space to call their own.

This was through the efforts of Jiselle Allport, a former resident of the area, who saw it fit to restore her childhood park on Francis Lane.

"It is dear to my heart since I grew up directly opposite the park," she told The Sun. "Actually it was our green space growing up, that was where we – the children in the area - did all our playing."

The green space, dubbed "King Square", was suggested by her brother Hanif and the community agreed.

"He had migrated to England in 1979 and he saw this place called King Square in South Wales. He said 'oh, that would be a nice name to call the park'."

He shared this idea with the neighbours back home and the rest, as they say, is history.

There is another reason why Allport holds the park dear to her heart.

"In 1980, on the first Community Day of Service implemented in Dominica, that was our project. We as a neighbourhood took on that project by constructing the retaining wall around the park," Allport said.

However, over the years families in the area migrated and no one remained to continue the upkeep of King Square. This led to the green space being neglected and falling into a deplorable state.

Restoration work on the park started in August 2021 after the area was cleaned by National Employment Programme (NEP) workers, who paved the way for Allport to bring her dream to reality. The restoration was completed in early 2022.

"Sitting on my father's porch, just looking at it, compared to what it was before with a lot of overgrown grass and people parking arbitrarily on it, the difference is heartwarming," she said.

Allport received assistance from her family, friends, and neighbourhood residents to get the beautification project off the ground. Harris Paints also contributed paint that went towards enhancing the aesthetics of the park. The upgrade costs about $2,500, from personal and family funds, and the former Goodwill resident says the idea was to become creative with reusable materials.

"I decided to use recycled material and just enhance the park and make it beautiful," she said. "We painted the walls, we did a hedge. The bench which existed before was broken after the Hurricane, so we just restored it."

Those who live in the community have commended Allport for spearheading this project, which she says belongs to the neighbourhood.

"I get a lot of reviews from people, taking pictures there," Allport said. "You can see how it really made a difference to the area and they really appreciate it."

The plan is to get neighbourhood children involved in the project so that the green space remains a permanent fixture in the community.

"We have a few children in the area. They have been running around and enjoying themselves so I just have to get them on board," she said. "The best way is for them to be protectors of the park. I am looking at maybe getting them to assist with the watering when I am not available."

In addition to getting residents of the area to be protectors of the park, Allport encourages partnership with Government and the corporate community to help improve security at the green space through the provision of a fence that will improve its safety.

King Square, which can also be viewed and accessed from Federation Drive, has garnered the interest of several passersby. Allport hopes this will inspire others to develop green spaces in their areas.

"I'm happy that there is something that people could pattern on so they could use towards enhancing their green spaces," Allport said. "And if everybody does a little of that in Dominica I think the country would be quite pretty."