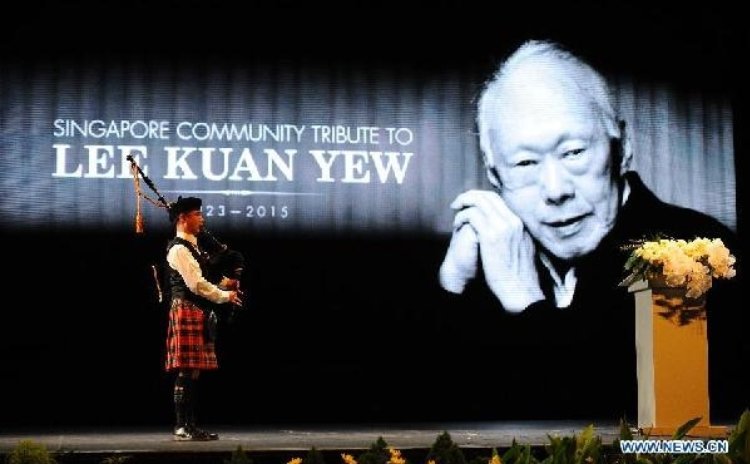 With a long political career as the city-state's head of government, Lee is widely seen as the man behind the Singapore Miracle: the successful transformation from a tiny British colony to one of the most developed nations within just one generation.

In 1959, Singapore became an internally self-governing state within the Commonwealth and 35-year-old Lee Kuan Yew became the country's first prime minister. The Cambridge-educated lawyer continued to serve as the country's head of government until 1990 and remained an influential figure afterwards.

During his time in office, Singapore achieved great economic success and emerged as one of the most developed nations in the world.

Between 1960 to 1984, Singapore's economy was growing at an annual rate of 9 percent and such impressive economic performance elevated the country out of poverty and into such clubs as the Four Asian Tigers.

According to Singapore's official statistics, the per capita Gross Domestic Product (GDP) in Singapore was only 428 U.S. dollars in 1960, but the figure rose rapidly and surpassed the 10,000-dollars mark in 1989.

In a sense, citizens of the young nation are now wealthier than those of many old industrialized countries, as the country's per capita GDP reached 56,000 U.S. dollars in 2014 and ranked the 8th highest among all economies.

Trade has been a major driver of the Singaporean economy. Thanks to decades of pro-trade policies by Lee and the early development of port facilities since the 1960s, the city state has become one of the busiest global trade hubs and it continues to keep its competitive edge in this aspect as of today.

Coupled with efforts advancing the rule of law, Lee's achievements in building a clean and efficient government has also made Singapore more attractive to businesses. And Lee's successors maintained the pro-business approach.

Starting in 2004, Singapore has been in the first place for nine consecutive years as the best country to do business in a ranking by the World Bank. It has been on top of similar rankings in the past decade.

According to political observers and economists, Singapore's success is a result of many factors, and Lee's heavy-handed approach to corruption certainly played a big role.

It is fair to say that Lee alone could not have taken all the credit of creating the Singapore Miracle, but he is undeniably the most import figure behind the story of success.