Lennox Linton to Government: Show us the studies for the international airport 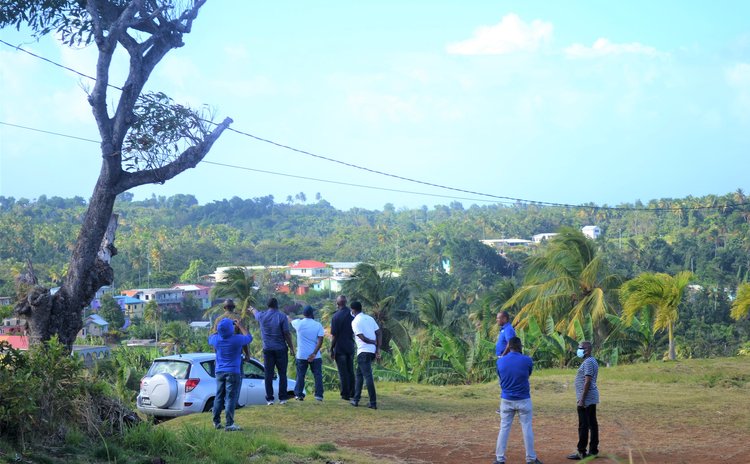 On tour of the International airport site at Wesley, officials of the UWP

One of the most controversial topics here in Dominica - the construction of an international airport- is once again taking center and as history would have it, the opposition and the present regime, seems to be butting heads, but this time over the acquisition of land in the Wesley and Woodford Hill area.

As the Government of Dominica moves ahead with its plans to acquire 411 acres in Wesley for the construction of the long-awaited international airport, the main opposition United Worker Party (UWP), is demanding that the administration makes available to residents the various studies which will support their claim that the 1000 acres of land which was previously acquired by the UWP Edison James administration, is not suitable.

Prime Minister Roosevelt Skerrit has said that the Government's decision to seek another location was based on the findings of a team of local experts which was set up in 2008 to review previous studies on the construction of an international airport in Dominica.

Speaking during a walkthrough of the proposed area where the government plans to build the airport, Leader of the UWP, Lennox Linton, reiterated that a report approved by the International Civil Aviation Authority in 1998 recommended the Londonderry site for the airport and labelled as "irresponsible", the government's decision to uproot residents in the Wesley and Woodford Hill areas.

"We're talking about the feasibility study, the geotechnical study, the environmental impact assessment studies, the environmental impact analysis. All of the market surveys were done, the master plan the site development plan, etc, and then land was purchased, over one thousand acres on what was described in the parliament of Dominica by members of the Dominica Labour Party, the Dominica Freedom Party coalition government as the most suitable site for the international airport in Dominica," he said.

With time quickly running by and patience running thin, the opposition is now calling for further action.

"A lot of people have asked why we haven't been saying anything. Well, the government probably needs some chance to get it right but the more time that passes, the more we recognize the reckless and dangerous work that the government has been doing. So we are forced right now to raise these issues, to voice these concerns," he said.

Further adding, "So the question for the people of Wesley: is that what you want? Is the money that is going to end up in the hands of some people for their property worth the destruction of the village of Wesley as we know it?"

While the Prime Minister has announced that work will commence in the first quarter of 2021, the opposition leader stressed that it's not too late to stand up.

He insists that the people have the right to see the studies that are going to justify that decision.

"That's what good governance is all about. So we make the demand again this afternoon that the studies were done by consultants working for the Dominica Labour Party, that justifies that moving to a new site from the one that we had 23 years ago is absolutely necessary and we need to see it now," Linton declared.

Linton urged Dominicans, especially those from the community of Wesley, Woodford Hill, and Marigot to demand answers from the government about this "reckless development programme that is going on right now."

The Marigot MP said while the Government remains tight-lipped about who the developers of the international airport are his party has reason to believe that the Montreal Management Consultant Est (MMCE) are behind the project.