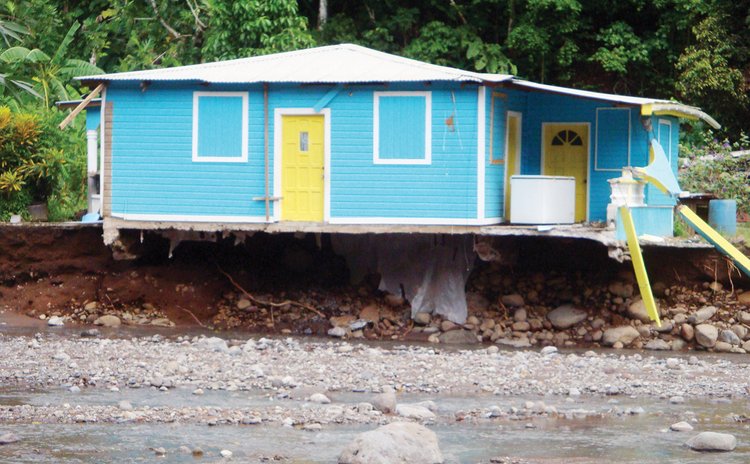 House built on the bank of a river

Tropical Storm Erika, which dumped heavy rains on the island on August 27, has exposed Dominica's vulnerability to natural hazards.

But then, so have many other disasters before Erika.

Many agree that important lessons have come out of the havoc wreaked by this most recent disaster.

Consultant architect, Severin McKenzie shared this view and he pointed out one vital lesson that he has observed: bad construction building practices, compounded by a general lack of understanding of dangerous conditions, contributed significantly to the havoc wreaked by TS Erika.

As an architect who has worked in many islands after major disasters, McKenzie maintains that it is especially important for Dominica to learn the lessons of Erika because it seems that the island has forgotten the lessons from Hurricane David and other storms and natural hazards. For him, Erika's path of destruction raises intriguing questions. Have the true 'cause and effect' variables been identified? How have human error and bad practices contributed to the storm's impact? Will Dominica seize the opportunity to put essential safety measures in place and get expert advice about capacity-building?

"A lot of the destruction was actually caused, to some extent, by bad practices," McKenzie noted, adding that the situation calls for comprehensive vulnerability assessments to be conducted throughout Dominica.

In his professional opinion, bad practices that could have worsened the effects of Tropical Storm Erika include the widespread building of walls along river banks, apparently to narrow the waterways, thereby encroaching dangerously on the natural courses of rivers.

In many of the badly affected areas and in other places, people have constructed buildings much too close to rivers, he said. And it is now commonplace to see utility lines passing under bridges; in fact, the utility lines proved to be a hindrance by blocking debris borne by the surging waters of the rivers during the storm.

McKenzie is particularly concerned about the number of bridges destroyed by the storm.

"Why should so many of our bridges go…? There must be some reason why the bridges collapsed the way they did. Bridges are not supposed to be designed to go the way our bridges went…" he said.

The architect also wants to know if the situation in Colihaut-- in relation to reports of an unusually high volume of silt that came down into the river-- had anything to do with a quarry that is being operated above the village.

Furthermore, McKenzie contended that the authorities should find out if the extraordinary amount of stones and debris that washed into the Checkhall River might have stemmed from a road construction project a few years ago, when there were reports of building waste being disposed of in the valley.

Noting the destruction to many sections of the various roads, McKenzie said that he believes this was caused, to a large extent, by drains that were clogged with grass. Therefore, he is calling on the Physical Planning Division to examine land use policies and put regulations in place to protect waterways better.

Moreover, McKenzie said he believes disaster preparedness committees should be activated in villages. These committees should also be involved in vulnerability assessments from a 'grass root level' to identify the hazards in their villages.

He is particularly concerned that people tend to forget disasters as time passes and that the talk about evacuation only lasts as long as the memory remains fresh.

"As time passes between those disasters people tend to forget and go back to bad practices…I wouldn't be surprised if in the next 10 years Petite Savanne is going to be bubbling with action once again," he said.

Bagatelle is an example of such forgetfulness, he said, noting that there was a landslide in the village some years ago, resulting in the deaths of many residents. Despite the hazards, "If you go there now, people are still there," he observed.

Good Hope, which was also severely impacted by the Tropical Storm Erika, is also a story of forgetfulness, he said, recalling that there was a landslide in the village about 20 years ago, resulting in the deaths of a nurse and her child. This time, three deaths in the village resulted from the recent storm.

McKenzie said Good Hope is just as vulnerable as Petite Savanne and there have been several landslides there over the years, even causing the village to lose its main road.

"They have made many recommendations for Good Hope to evacuate because there is a lot of loose soil there and it comes down all the time," he said.

He recommends that experts should be sent to Petite Savanne to examine exactly what happened there to cause the land to slide from both sides of the mountain.

McKenzie acknowledges that with the type of terrain in Dominica and the scarcity of suitable land for housing development and agriculture, evacuating entire communities is challenging.

The solution may be to consider housing developments with multi-family apartments, McKenzie said, but he acknowledged that this could pose a major cultural shift.

In Mckenzie's opinion, if appropriate disaster preparedness committees had been in place or if the country had been adequately prepared for a disaster, some schools that are still closed would have reopened already, except for those in villages that were actually cut off from each other.

Erika's flood waters have clearly mapped out Dominica's danger zones as it relates to flooding and the water courses, McKenzie said, so there is no good reason why the island cannot learn the lesson and do whatever it takes to be prepared.