Let there be lights: five playing fields get lighting equipment 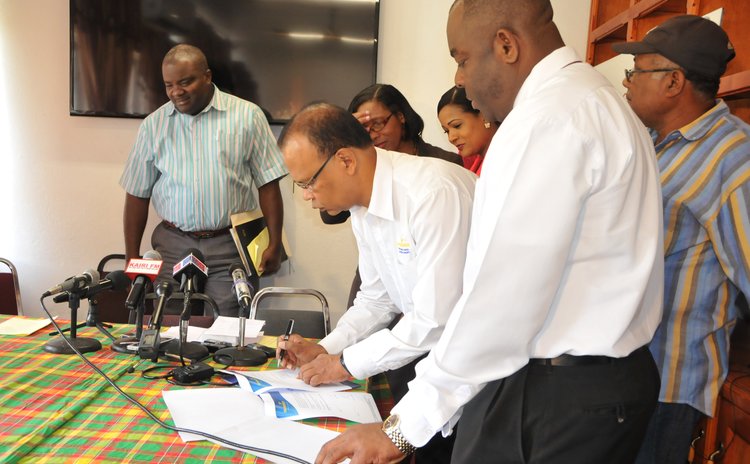 Dominica National Lotteries Commission and Solaris have signed an agreement to provide lighting to five playing fields across the island.

The agreement was signed on March 11 in the conference room of the Ministry of Youth, Sports, Culture and Constituency Empowerment.

Permanent Secretary in the Ministry of Youth, Sports, Culture and Empowerment Mandra Fagan said that in March 2015 the Government invited Solaris to Dominica to conduct an assessment of playing fields in Dominica.

She said the focus of visit from Solaris was to access the current lighting fixtures on the playing fields and to explore the possibility of installing solar powered lights to eliminate these facilities.

"Surveys were conducted on 24 playing fields island wide. This project is in keeping with Government's policy to encourage the use of renewable energy and therefore all five playing fields will be solar powered," she said.

Fagan said that the solar powered lighting fixtures will be high intensity sports LED Lights which will be outfitted with battery storage and solar panels and will carry 200 watt lights, 250 watt solar panel and 200 AH12 volt batteries fully attached to steel galvanized poles.

"Government recognizes that in order to fully develop sports there must be investment in sports and one of the ways we are seeking to invest in sports is by upgrading of playing fields in every community around the island," she said.

Fagan continued stating that this project will seek to enhance the calibre of athletes since it will provide them with extended playing hours and greater opportunities for training.

She said that the lighting of the playing fields would encourage individuals to partake in physical activities after work.

"We all aware of the high instances and high costs if chronic non-communicable diseases to families and the state. The government views the lighting of playing fields as an excellent opportunity for citizens to engage in physical activity in these facilities after working hours," said Fagan.

Franklyn Fabien, the Deputy Chairman of Dominica National Lotteries Commission said : "It is well known that sports and physical education is an integral part of learning and means to achieve physical and mental health and can be considered an important component of life's activity."