Let's face the truth: Our parliamentary system is broken 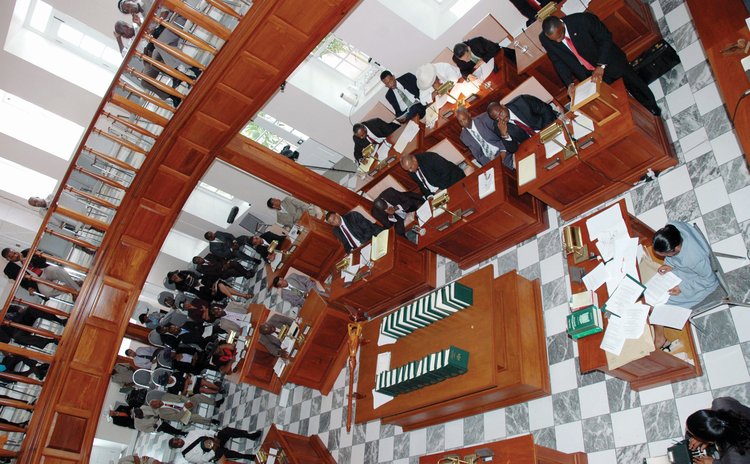 We have said it before, we will say it again; Dominica's parliament is a little more than a rubber stamp for Prime Minister Roosevelt Skerrit's policies and programmes. There is no doubt that today's Parliament is not what it should be, as specified by the authors of Dominica's Constitution.

Performing his responsibilities, Daniel James, the Clerk of the House of Assembly, distributed the usual bundle for the meeting of the parliament scheduled for Monday 25th June 2018.

Among these documents was the somewhat hefty Anti-terrorism Bill that opposition leader Lennox Linton did not read completely before he took to the airways of Q95FM, the opposition leaning radio station, to accuse the government of failing to adequately define terrorism in the Bill and to state clearly that terrorism, as far as the Bill was concerned, does not mean protests, demonstrations and strikes. But Linton said he was wrong and he apologised one day later.

If he had had the time and he had read it completely Linton would have seen that Part 1 subsection (2) of the Bill states: "An act which … (b) disrupts any service and is committed in pursuance of a demonstration, protest or stoppage of work and is not intended to result in any harm referred to in paragraph (a) of the definition of "terrorist act", shall not be considered a terrorist act."

Although Linton must accept, in local parlance, "his blows" for leaping before looking, the ultimate blame for the error should fall on the shoulders of the Government for continuously hiding, as much as it can, its legislative agenda from the general public. Government's modus operandi is: minimum exposure of proposed Bill, rush Bill through parliament, and have all three readings within one sitting.

A similar unfairness occurs during the annual budget debate. Mr Skerrit presents the budget that his government spends months preparing and within 24 hours of its presentation the opposition is expected to critique it and if the opposition parliamentarian inevitably speak nonsense he is severely criticised by the government and its supporters.

Because the Government believes parliament, the Speaker included, is just an extension of the party, it behaves as if debates and critiques are annoyances that should be minimised. Hence, the secrecy and the penchant for allowing the minimum time period before the public is made aware of a proposed law.

But, as we argued before, the separation of parliament from the executive is a myth; an ideal that the system fails to support in practice. We are of the view that there is a fundamental contradiction between what is theoretically expected of the House of Assembly in the Westminster system of Government that we inherited from Britain and what exists in practice in Dominica today.

Parliament is brazenly undemocratic. It is our opinion that the Prime Minister is an unacknowledged king or dictator who controls, with an iron fist, not only his Cabinet but also parliament and its agenda.

Attorney-at-Lawyer and historian Dr. William Riviere made that point succinctly in an article entitled: "Our Constitution: Democracy or One-man Rule" published in the Sun Newspaper a few years ago.

Dr. Riviere argues that "the intention of the founding fathers of our nation may well have been, that the Executive would be collectively responsible to Parliament. "But, quite apart from nebulously stating so at Section 60(3), the Constitution signally fails to provide any mechanism at all by which such collective responsibility might be achieved.

"More correctly, it is the Prime Minister as individual, not the Cabinet as collective that from the standpoint of our Constitution dominates the Legislature. In fact, the power and authority of the Prime Minister goes beyond this. It is all-pervasive.

"The Constitution invests the Prime Minister with power, directly and indirectly, to effectively control not only the Legislature but, as well, the Head of State, the Cabinet of Ministers and the institutions of Public Administration, including the Security Forces. And the Prime Minister is equipped with power to greatly influence the functioning of the Judiciary".

It is therefore unquestionable that parliament is being monopolized by the party in power and specifically by the Prime Minister.

To bring some semblance of equity to Parliament, we therefore suggest that the Speaker do all in his or her power to allow the Opposition the opportunity to ask questions of the government. 'Question-time' during the sitting of parliament is one of the few instances in which the Opposition has an opportunity to make government ministers pay attention to the people's business. More importantly, it is an opportunity for citizens to assess whether their government is acting responsibly and in the best interest of the people.

Although ministers sometimes grumble that opposition parliamentarians get in the way of progress by asking ill-advised questions, it is the opposition's fundamental role to ensure that issues are debated openly and transparently and that the government is acting responsibly and is accountable for its actions. When question-time in parliament is diluted and made into a sham, and when the system does not allow adequate time to read and digest proposed Acts and national budgets, as arose over the past week and occurs at budget time every year, we cannot be blamed if we sometimes wonder whether we are really living in a democracy.