Let's put some urgency to the electoral reform process 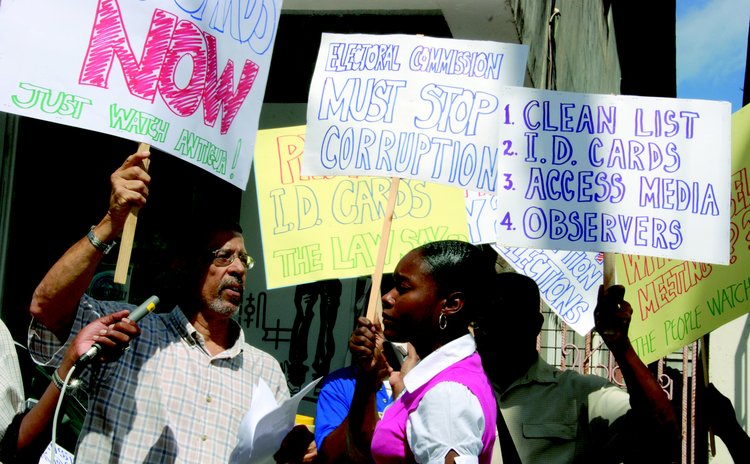 Undoubtedly Dominica cannot make significant progress if the country fails to reform its antiquated electoral laws. But unfortunately, Dominicans appear to be in no hurry to arrive at a consensus on one of the most divisive problems affecting this fledgling democracy. We like it so, it appears.

Although general elections are due within the next four years, based on the pace at which we are moving forward towards solving these vexing issues we may need 20 more years to effect the necessary adjustments to the electoral laws. Dominicans have not even agreed on the specific changes they should make to these laws nor have they set deadlines for getting the job done.

But it appears that Prime Minister Roosevelt Skerrit has made the first move as we virtually crawl towards electoral reform. In a press statement issued on 23 June 2015 Mr. Skerrit said his ruling Dominica Labour Party (DLP) had presented suggestions and recommendations on electoral change to the independent Electoral Commission. We've heard nothing from the Commission.

In that press statement Mr. Skerrit added that he agreed that there is a need for an upgrading of the electoral laws of the country and that the current laws have always produced election results that are free and fair, a rather tongue in cheek statement. Mr. Skerrit seems to be saying that the process by which we choose our governments is not broken so why are we trying to fix it- it only needs some polishing, if anything.

As we have opined on numerous occasions, general elections in Dominica cannot be described as free or fair when one party spends tens of millions of dollars on electioneering whilst the other parties spend a few hundred thousands. So we disagree with Mr. Skerrit that elections in Dominica have been fair.

In addition, in that press statement Mr. Skerrit said he suggested that the Electoral Commission should clarify the laws on bribery including the laws that expressly prohibits the transportation of electors or supporters to vote. The DLP argues that it is bribery to pay for the transportation of supporters to vote only if one can prove that the person who receives the free transportation was induced to vote for the party or the candidate who gave the free ride, or a party and candidate he would not otherwise have vote for. That, we submit, is absolutely difficult to prove one way or the other.

Recall that the opposition has accused Mr. Skerrit's administration of using its large electioneering budget to buy airline tickets for hundreds of Dominicans in the Diaspora to return home to vote. If that aspect of the law is changed then the uneasiness that the recruiters may feel that they are doing something illegal will be erased. Hence, any party with a large budget could then openly and boldly fly in thousands of Dominicans and their friends and family to the island to vote. And before they vote, fete them at Screws in Wotten Waven followed by an all-night party with Michel Montana at the Windsor Park Stadium. Elections would then become a farce and a waste of time unless the Electoral Commission sets restrictions on what would have become a new definition for bribery.

In addition Mr. Skerrit is suggesting, in the press statement, that the Electoral Commission should allow the use of National Identification Cards for voting purposes and that government will ensure that these cards "are in place for use sufficiently in advance for the next general election".

Nevertheless, we continue to argue that the issue of campaign financing is as important as the issuance of voter identification cards or the cleansing of the voters list, or bribery of voters by offering them plane tickets valued at thousands of dollars. Yet it appears that the ruling Labour Party and the UWP have decided to basically ignore the issue. As we said earlier, we are of the view that no election can be considered to be free and fair if one party has the where-withal to spend as much as twenty million on its campaign and all the other parties combined can only muster a few thousands.

So while we look at ways of transforming our electoral system, we must not forget the issue of campaign financing. This matter is so crucial to the smooth operation of our democracy that it is surprising that so few persons take it seriously. There is no doubt that money from undisclosed sources has corrupted politics and the election process in Dominica and unless campaign financing measures are legislated ,free and fair elections will continue to be a mirage.

But we will be the first to admit that it is expecting too much from the Skerrit Administration to anticipate that this government will draft and implement campaign financing laws at any time in the near future. But we are almost sure that the issue will rise again with a vengeance during the next general election when political party supporters on both sides will accuse each other of accepting money from rouge governments and shady characters. At that point we will hope that only legitimate governments will come to the auction rooms and not drug lords. The consequences of drug monsters having influence on our Cabinet are unthinkable, but that situation is very possible because our laws give politicians permission to do their own thing, unregulated and unchallenged.