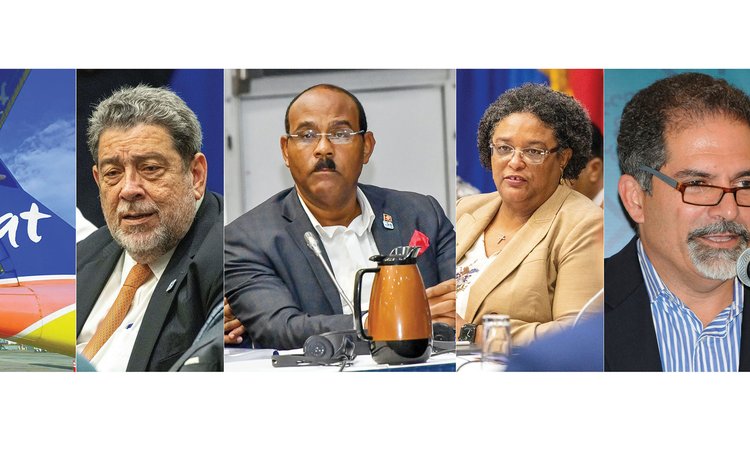 Hotelier Gregor Nassief believes the collapse of regional carrier, LIAT, may turn out to be a blessing in disguise.

"Like [hurricane] Maria and COVID, every crisis is an opportunity, and as painful as it may seem now, we may look back at this as a blessing," said Nassief, chairman of GEMS Holdings Limited, which operates and manages Secret Bay and Fort Young Hotel.

Burdened by an approximately EC$110 million debt, LIAT was mortally wounded by COVID-19, which inflicted another EC$35 million in losses on the struggling carrier.

"It's a big sum of money," Ralph Gonsalves, the prime minister of St. Vincent and the Grenadines – one of the four majority shareholders of LIAT – said of the coronavirus-related losses.

Faced with an insolvent airline, three of the four shareholders – Gonsalves, Barbados' Mia Mottley and Dominica's Roosevelt Skerrit – agreed at a meeting on 27 June to dissolve the carrier. Antigua's Gaston Browne disagreed with the decision.

"Will it lead to a new, leaner and more efficient LIAT? Will it lead to open skies with freer and fairer competition? Will it lead to governments reducing or eliminating taxes on inter-regional travel, thus making travel throughout the Caribbean more affordable? Will Dominica acquire its own assets, as has been advocated by the DHTA [Dominica Hotel and Tourism Association] for years, and reach an operating agreement with another airline, thus securing and controlling our 'airlift destiny'?" he asked. "These are all opportunities which we must seize."

The businessman, a critic of the airline's service, said the concept of LIAT "is to connect the Caribbean through reliable and affordable travel", stressing that this concept was critical to the long-term survival of regional economies.

"I am optimistic that there is enough justification and demand for this concept, and whether through a new LIAT, or new and multiple players filling the gaps, or both, it needs to happen, and we must act to ensure that it does," he said.

In a letter dated 2 July to his fellow leaders, Browne complained about their inability to "agree on the importance to our regional integration project" of keeping LIAT alive "and to its further value as a feeder airline to transport tourists between the countries of the Caribbean".

He also contended that his country enjoyed little of the benefits of membership in the Caribbean Community (CARICOM) except for serving as LIAT's headquarters. The University of the West Indies also opened a campus in St. John's last year.

"It is also troubling to my Government that shareholder governments in LIAT 1974 Ltd would decide by majority vote to liquidate the airline without putting in place any arrangements for meeting obligations to creditors and employees," the Antigua leader wrote.

Browne appealed to the three leaders to reconsider the decision and instead reorganise the airline "for the benefit of the Caribbean's people; to continue to provide the essential bridge between our nations; to satisfy obligations, at least partially, to creditors and employees through negotiations; and to turn the airline into a leaner, more efficient service that could be profitable".

Should they refuse, he said, Antigua and Barbuda would launch LIAT 2020 Ltd, for which preparations were already under way.

"We have applied to resister the name, and we hereby seek your release of the trademark to allow LIAT 2020 Ltd to be registered," he advised.

However, little appears to have come out of Browne's appeal, with Gonsalves, the chairman of the shareholder governments, suggesting he was ready to move on.

"As far as St. Vincent and the Grenadines is concerned, I am very interested in making sure that we have . . . to make relevant connections, and connections, particularly Trinidad, Barbados, the Windward Islands, go right up to Antigua and I'd expect that in the northern part, there'd be aircraft operating out of Antigua to make some sort of connection," Gonsalves told Vincentian radio station, WE FM.

Mottley also seemed to indicate that the matter was closed, speaking about LIAT in the past tense at a CARICOM special conference last Friday.

"LIAT has been a critical part of our history; it allowed Caribbean people to move. But there is a point where the instruments of the past must be transitioned… [Keeping LIAT alive] would require a level of funding that we simply do not have in the affairs of our communities," the Barbadian leader said.

Mottley revealed that six airlines – SVG Air and One Caribbean from St. Vincent, the Trinidad-based Caribbean Airlines, InterCaribbean Airways from the Turks and Caicos Islands, the French-based Air Antilles and the Fort Lauderdale, Florida-based Silver Airways – had expressed interest in taking over LIAT's travel routes.