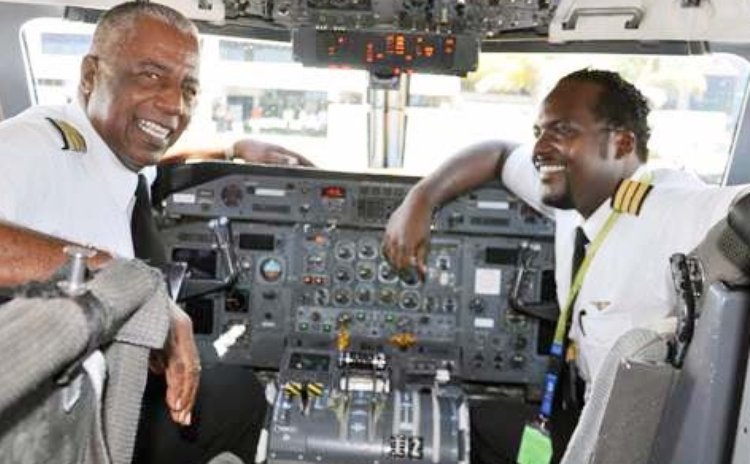 Scores of well-wishers gathered on the tarmac of the Grantley Adams International Airport on Friday, January 31 as Captain Keith Robertson brought in his final LIAT flight after 40 years with the airline.

Before landing flight LI 371 from St. Lucia, Captain Robertson did a low pass over the runway, tipping the wing of the aircraft to acknowledge those who had gathered for the occasion.

To loud cheers from his colleagues, his family, his many friends and members of the media, the popular Captain Robertson guided the aircraft through a welcome water salute from two fire tenders from the Barbados Fire Service.

On this occasion, Captain Robertson was the first to disembark the aircraft but he stood at the bottom of the steps and greeted all of the passengers as they exited the plane.

Among his many admirers was the Barbados Minister of Tourism and International Transport Richard Sealy who called Robertson "a LIAT man to the core".

"He was someone who believed in this organization and understood its importance. Thank you for a tremendous contribution and for touching so many lives and souls in a meaningful way," he said.

Captain Robertson described LIAT, which he served in several capacities, as "a beacon in my life...40 years has gone by so fast that the word retirement has not yet sunken in."

But, despite the wonderful accolades he received for his considerable technical skills, Robertson saw his work with LIAT in a more creative light: "Flying for me was like an artist taking to canvas. Selecting the best route was a priority for the comfort of my passengers. I would always say to my first officers, treat my passengers like eggs and we'll be great friends. (For that, I) came to be known as 'Captain Smooth'."