Life in a disaster zone 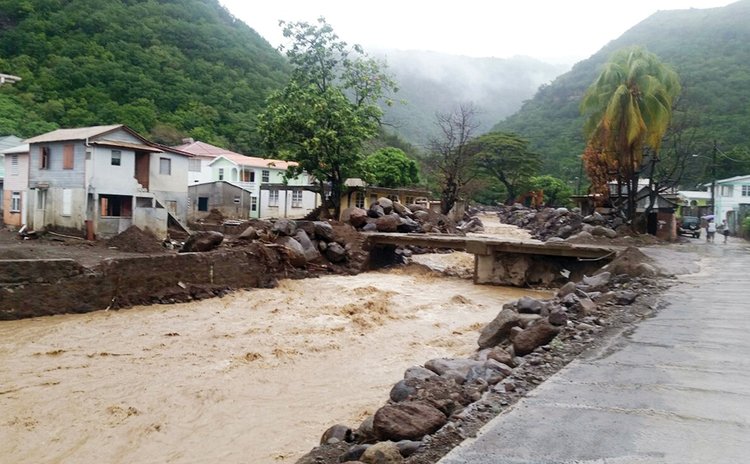 More than two months after Tropical Storm Erika, Coulibistrie is still an official disaster zone and residents are uncertain about the progress and outcome of the state's relief efforts.

Government declared the area a disaster zone after the storm because the Coulibistrie River had burst its banks and swept through the village causing widespread destruction.

Now, some Coulibistrie residents are complaining that the state's efforts to relieve their plight seem to be too long and drawn-out and they are seeking more clarity on the way forward.

The residents are concerned about their personal hygiene and that of the entire village because many toilets and septic tanks remain blocked with sewage and other debris from the storm.

Roseline Elie Degallerie reported that several villagers have no choice but to use the river as a toilet because of blocked septic tanks and the unavailability of piped water.

Degallerie said the situation is even unhealthier because many persons are forced to bathe as well as wash their laundry and dishes in the same river in which people relieve themselves.

As such, the villagers are hoping Government will help them clear their septic tanks and do what is necessary to restore adequate disposal of sewage in the village.

Degallerie said the starting price for clearing a septic tank in Coulibistrie is $1000, a price many villagers cannot afford in these trying times.

Speaking of her own distress, Degallerie said during the storm the river broke the doors of her home, surged through her house and destroyed most of her possessions.

She lamented that her situation has not changed much since then, and it is compounded by the fact that she has to look after her bedridden father.

Degallerie's plight is shared by many of her fellow villagers while others are still displaced— forced to live with relatives and friends waiting anxiously for the opportunity to return home.

An air of uncertainty permeates the village. Families are still trying to fix homes and replace general household items such as fridges, stoves and beds.

Another resident, Barbara Phillip said during the storm she lost all her belongings in the ground floor of her building.

Phillip who is a Local Government and District Development Officer, said her husband-- a plumber-- lost all his tools and equipment, some of which he had just imported.

She said they had invested $10,000 in a farm and lost all their crops.

She acknowledged assistance from the Ministry and other institutions and said she and a few other villagers have been getting piped-water from midnight until 5:00 a.m.

Phillip is concerned about sewage system in the village, because of multiple blocked septic tanks and the fact that the septic tank cover for the public toilet was broken during cleaning.

The public convenience is also in need of repairs, Phillip said, and an estimate for the cost of rehabilitation has been prepared.

She reckons that over 50 families were displaced and people's personal funds have been severely depleted, like those of other affected villagers.

Residents are anxious to get a clear idea from government about the relief efforts. "Help needs to come faster . . . we are far from normal," one resident said.

An elderly woman who lost her home said she is staying at a UK-based Dominican's residence.

The woman, Ruby Joyce, said her house is still standing, but the river destroyed it and washed away the land, leaving it dangerously close to the river.

Joyce said she lost everything and she wants the authorities to engage the Coulibistrie storm victims and discuss their options.

Meanwhile, Parliamentary Representative for Coulibistrie Hector John is calling for the permanent relocation of some residents whose homes were destroyed by the river.

John said about 15-20 riverside homes were destroyed, and he wants nearby homes evaluated urgently to determine if those householders need to be relocated for their safety.

He said a detailed list of endangered houses was sent through the Local Government Department, but he is not satisfied with the level of urgency being shown.

"I think the urgency is not there . . . I think too much foot dragging is going on… too much red tape. We need to do better than that…it's a disaster." John complained.

"There should be an urgent drive by every department of government, everybody involved to ensure we bring back the communities to normal in the quickest possible time."

John sees a need for serious discussions with villagers about the possibility of relocating persons from the high risk area for their safety, pointing out that relocation should not be sudden or forced.

"Help them understand why it is important [to] meet those building codes and requirements and also that government playing a vital role in ensuring that process is successful," he added.

Remaining in high-risk areas may have negative implications on residents' property value and their access to loans from financial institutions, John warned.

Giving an update, John said 85 percent of the village has been cleared, but there is much to be done because about 20 homes were destroyed and 137 households were directly affected.

Villagers have been complaining about being billed for water that they have not used, John said.

Further, he is concerned about the farmers, noting that the river washed away entire crops. In other cases, farmers could not access their lands to harvest their produce.

He is concerned that farmers who sell to Antigua, Guadeloupe and Sint Maarten will lose their markets by the time they are able to harvest their crops.

Fishermen are also anxious to get back their boats and other equipment in order to resume work, John said.

Meanwhile, DOWASCO's Public Relations Officer, Edward Registe said the utility company has been trucking water to Coulibistrie in the absence of piped water.

He noted that the pipelines in Coulibistrie have been severely damaged and the water intake is heavily silted. Furthermore, the access road to the intake cannot accommodate the heavy equipment needed to fix it.

Nevertheless, DOWASCO is trying to restore other smaller intakes to make pipe-borne water available to residents.