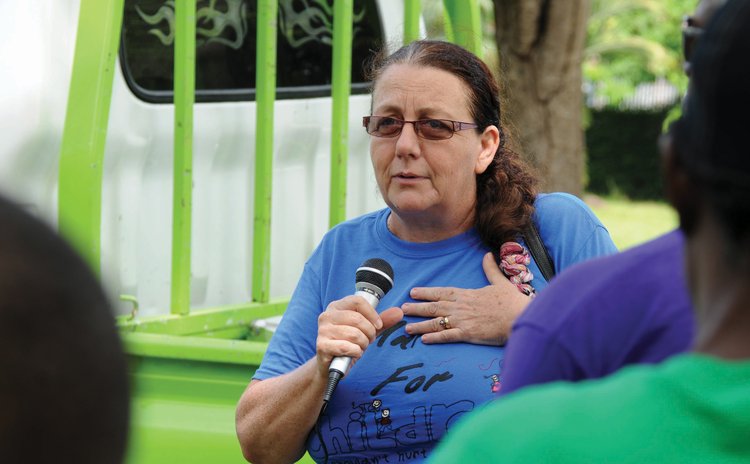 Tina Alexander at a child abuse march at the Botanic Gardens, Roseau

Across the globe from 25th of November for sixteen days, activists are busy raising awareness about gender based violence. This includes child sexual abuse, domestic violence and any sort of aggressive acts or discrimination against individuals because of their gender or orientation.

In disasters we know many people are displaced and living with extended family or friends or even neighbours or strangers. We know that nearly 40% of school children have left the island and are now resident away from Dominica. Parents have expressed concerns about their children being taken advantage of in strange surroundings.

Transactional sex becomes a more appealing option when you have lost everything. These have been uncertain times with loss of income through post disaster unemployment and gifts of relief and rescue being offered from people who should know better have been reported.

Traumatised people tend to turn to drugs and alcohol and we know that this results in poor decision making and risk taking. Tempers are already frayed as we face the prospect of inadequate funds to restore our lives. Domestic arguments and relationship breakdown are commonplace.

Our victim support network is just getting back up thanks to Flow and Digicel. However, it is still difficult to report if you are the victim of a sexual assault especially if you are dependent on the perpetrator. People who need help can still contact us for support in reporting by calling 2653779.

Lifeline is looking forward to working with UN agencies such as UNFPA and International NGOs such as International Medical Corps who are in Dominica providing psycho social and GBV prevention and Response support and training.

We continue to work with the Gender Bureau whose office was compromised by Maria. We are collaborating in providing training and support to vulnerable populations.

Mandatory reporting of child sexual abuse is now law and if anyone knows of gender based violence going on they should not keep it secret. Go to the police or if you want to stay anonymous call Crime stoppers.