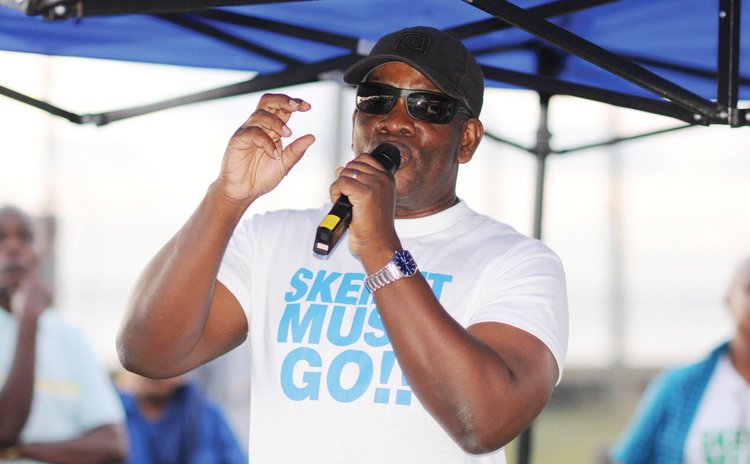 Invoking the memory of the revolt of 1979 when the Patrick John administration was overthrown in a palace coup, Lennox Linton, the political leader of the opposition United Workers Party (UWP) on Thursday called for an interim government of national unity.

Linton made the call at his party's public meeting on Thursday night in Lagoon, Roseau where he reiterated a demand for the resignation of Prime Minister Roosevelt Skerrit and his Cabinet for alleged mismanagement of the Dominican economy and the Citizenship by Investment (CBI) programme.

Linton did not say how or when the resignation of the Skerrit administration would be effected but Prime Minister Skerrit, responding to calls for his resignation, said recently that he would be removed from power only through the electoral process and that he would be contesting the next general election.

Earlier, on Thursday afternoon, a few hundred supporters of the UWP held another meeting near the Pottersville savannah where speakers drummed up enthusiasm for the Lagoon meeting.

That Pottersville meeting was expected to be the origin of a planned march through the streets of Roseau that Police Commissioner Daniel Carbon had earlier denied.

The UWP wrote to the Police Chief on 15 March 2017 seeking permission to host a public march from Pottersville to the City to culminate at Lagoon on Thursday 30 March 2017.

After the Pottersville meeting ended (at about 6. 45 pm) a number of UWP supporters defiantly walked on the sidewalks towards Roseau shouting "Skerrit Must Go."

In a letter dated 24 March 2017 to UWP's public relations officer, Nicholas George, Police Chief Carbon had denied the UWP request for a march for what he called "public safety and national security reasons".

In that letter, Chief Carbon quoted Section 5(4) of the Public Order Act that states: "any person who (a) takes part in or organizes any public procession without the written permission of the commission to do so or (b) who aids, abets, counsels or procures any other person to take part in any public procession in respect of which no written permission as required under this section has been obtained from the Commission is guilty of an offence".

Carbon was probably reacting to disturbances that occurred on 7 February 2017, when the UWP and the Dominica Freedom Party hosted a public meeting on Kennedy Avenue near Government Headquarters to call on Prime Minister Roosevelt Skerrit and his Cabinet to resign.

Following that meeting young people rioted, burnt and vandalized business places in Roseau which prompted the police to use teargas to control hordes of restless youth.

Soon afterwards, Prime Minister Roosevelt Skerrit declared on national radio that he had information to indicate that the UWP and other opposition parties planned a violent overthrow of his government.

Also in February National Security Minister Rayburn Blackmore said that four officials from the Caribbean Community (CARICOM) Implementation Agency for Crime and Security (IMPACS) had arrived in Dominica to conduct an investigation into the disturbances and the alleged coup.

But as the Sun reported two weeks ago, the foreign detectives had determined that there was no plot to overthrow the government. But apparently the investigations continue; in a letter Police Chief Carbon has summoned Dr. Christian to another round of interviews at police headquarters.