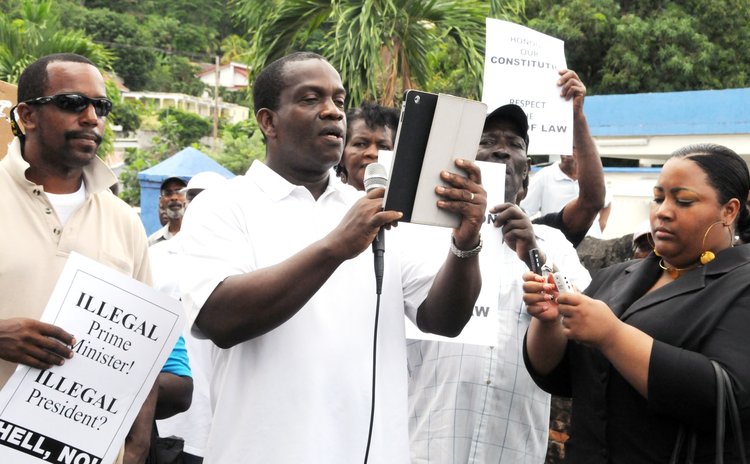 A victory is a victory is a victory; let's just celebrate and thank the people. That's what Lennox Linton, the newly elected political leader of the opposition United Workers Party (UWP) told his supporters on Friday morning on Q95 radio following the withdrawal of Alix Boyd-Knights' nomination for the post of President of Dominica.

"We will go to the meeting on Friday afternoon but for a different reason," Linton said. "We have a victory to celebrate, a very important people's victory."

Earlier Linton called his party supporters to gather outside the House of Assembly on Friday afternoon to protest government's nomination of Boyd-Knights. The UWP contends that Speaker Boyd-Knights has been a thorn in the flesh of the opposition for more than a decade.

Over the past two weeks Prime Minister Roosevelt Skerrit has endured much criticism after he nominated Boyd-Knights as a replacement for His Excellency Eliud Williams, whose one-year temporary position ends in October, 2013.

During his statement on the DBS Morning News on Wednesday, Skerrit stated that Boyd-Knights had served her country "exceptionally well" over the past 14 years as Speaker of the House of Assembly. He said Boyd-Knights withdrew her nomination because of concern over the safety of her family.

"We still hold that Madame Speaker was an ideal candidate, that she has the necessary qualifications to be President and I dare say more qualified than many to be president," he said. "But I cannot force the Presidency on anybody, the person has to accept. She accepted initially."

But Linton argues that "the planned appointment of Alix Boyd-Knights was scandalous; it was disgraceful; it was not in the public interest and it should not be allowed to stand".

Linton also stated that he doubted that Boyd-Knights withdrew her nomination because of fear, as the Prime Minister said in his statement to DBS.

"Which family safety? Where does it emerge that there is an issue of family safety for Ms Knights who has harassed members of the opposition for 14 years with nobody paying attention to any member of her family?"

Linton said the UWP is "in favourable consideration" of the nomination of Jennifer Wallace-Lafond, a retired civil servant, but the opposition must be given the time to be properly consulted.