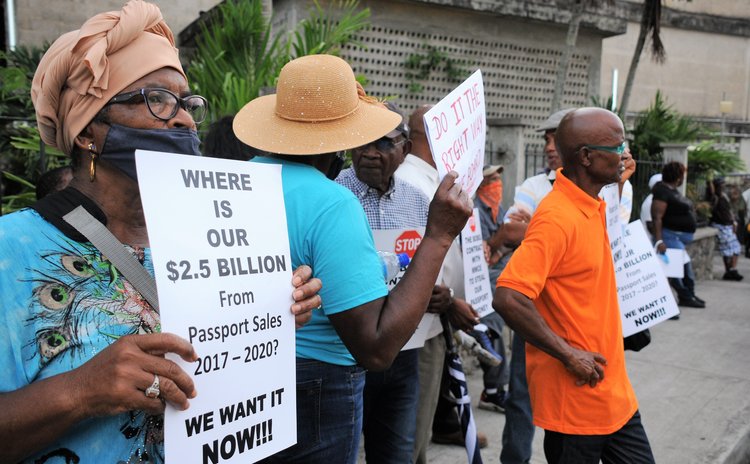 UWP supporters stage a protest outside the stadium

People who have been commenting on the resignation of Lennox Linton as the political leader of the opposition United Workers Party (UWP) seem to overlook one basic and significant fact: he did not win any of the two general elections that he contested as leader of the UWP simply because he could not win.

The Caribbean Court of Justice (CCJ), Dominica's highest court, recently said as much.

In his nearly a decade as leader of the UWP, Linton tried almost everything legal- boycotts of parliament, billion-dollar-marches, court challenges, "Between-You-and-Me" radio shows, overseas campaigns, the list goes on. He is even accused, by the government, of inciting a "coup" for which he has been before the courts for five years.

In other words, during the last nine years, the ruling Dominica Labour Party (DLP) went after Linton with all its propaganda-and-misinformation guns blazing, with all its vile venom spewing, with all its hate, with destruction and bankruptcy of Linton as its ultimate goal.

And, sad to say, it all worked very well. No one could endure, and survive, this onslaught. It is what it is.

In the end, all that did not matter.

What mattered is that Linton as leader of the UWP could not win an election, the ultimate goal of any political party and party leader, because he was playing barefooted and the DLP was playing with spiked-boots, in Dominica's perennial political football game. And his goal posts were fixed two feet apart while the DLP shot at goals sometimes 100 feet apart. As Americans say, "you get what I'm saying?"

In addition, the DLP played the political campaign game with hundreds of millions of dollars and had at its disposal the power, and abuse, of incumbency. Opposition parties spent a few hundred thousands; the DLP bought tickets for hundreds, if not thousands, of overseas supporters to return home to vote- the UWP could not or would not; the DLP paid famous Jamaican music stars to entertain supporters at political rallies; the UWP could not even afford Calypso King Dice or First Serenade.

Party division is not the issue

Hence, the much-vaunted back-biting and vilification, and division within the UWP, now being given as the reason for Linton's departure, is only a sideshow that would not have mattered much had Linton and the UWP had any chance of winning any general election. Including the next general election. In case you forgot, divisions within Dominica's political parties are as common as feathers on roosters. Just ask Alex Bruno; just ask Charles Savarin about the leadership battle of the Dominica Freedom Party of Dame Eugenia Charles; just ask Roosevelt Skerrit of the DLP about the virtual wars in Rosie Douglas's, Pierre Charles's, Patrick John's, and Edward Oliver LeBlanc's administrations.

But the members of the UWP are understandably frustrated by the lack of progress on major issues, such as electoral reform, that is preventing greater success at the polls. Linton tried but he failed.

No progress on major issue of electoral reform

For example, the UWP has also been making very strong public statements that indicate that without electoral reform, there would be no elections. Yet the party contested these elections, lost, and failed to adequately explain its change of plans to the public.

For example, new and sanitized voter lists and the issuance of identification cards for voting has not been done since the issue became alive in 2005. Yet the UWP protests in grand style election after election.

For example, in 2016, Linton said the people of Dominica will ultimately decide whether they will continue tolerating "this brutal savage assault on the integrity of our elections, the backbone of our democracy".

On August 18, 2016, Linton publicised a letter that he wrote to Gerard Burton, the then chairman of the Electoral Commission on outlining his party's agenda for electoral reform.

The letter stated that the UWP wants: an accurate register of voters - a total re-registration of all eligible voters on the basis of which a new register of voters will be issued by "the first quarter of 2017" or within six months. Nothing much happened.

Again, Linton wanted the Commission to look into the enforcement of the law against bribery, treating, personation, illegal voting and election offences in general. Nothing much has happened. But the supporters of UWP have themselves to blame for the lack of movement on the major issue that would help their party at the polls. Calling talk shows alone will not work.

Where are the oft-repeated promises of the "endless boots on the ground"?