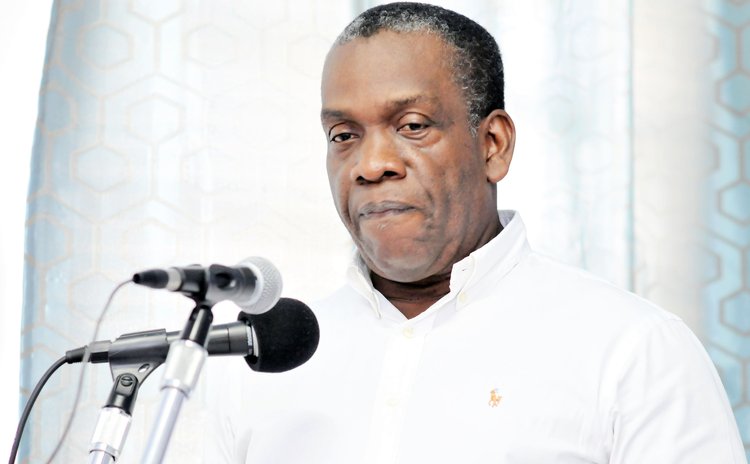 Speculation is rife, that in the next few weeks, when the opposition United Workers Party (UWP), holds its delegates conference, a huge change will be made in its leadership, as several members are singing the tune of Dicey: "It's time for change."

Word from UWP General Secretary Nicholas George is that the party is reviewing its decision to hold its Delegates Conference on Sunday 28th February 2021 at Marigot, wholly due to the large number of delegates expected to attend.

"The party's need to conform with the health protocols issued by the nation's Ministry of Health and Wellness and discussions are ongoing to explore the feasibility of hosting the conference via ZOOM," George told the SUN. "The areas around the island delegates would be required to assemble and the logistical requirements to support such a decision is made."

In any case, the management committee is advising that the delegates conference must be held no later than June 1, 2021, everything considered.

However, whichever date is selected, some party members are saying that if the current Leader of the Opposition, Lennox Linton, is nominated as party leader, they'll be forced to walk away, as they see nothing but another election loss under his leadership.

Speaking to the SUN on condition of anonymity, a UWP candidate in the 2019 general elections claimed that many campaign suggestions recommended to the current political leader were not utilized, which lead to the defeat of the party.

"Many of us know that and it's been said secretly," the source said. "Key supporters of this party will all admit that if we had a different leader this past election, we would have emerged victorious".

Asked who the members thought would be a suitable candidate to take on the leadership position, two names came up: the feisty newcomer, Senator Anette Sanford of the Kalinago Territory, and questionable member Joshua Francis.

On Linton's leadership capability General secretary George said: "Every leadership or executive position will be contestable at the party's delegates' conference. I am not sharing views on who I will support for any position currently; a nomination process has started and the nominations committee will present their recommendations to the conference for the consideration of the assembled delegates. Nominations can also be made from the floor".

George believes that the leadership of the opposition UWP is not the most pressing issue in Dominica, nor will these issues immediately disappear on the selection of the party's leader.

While the SUN contacted several other members of the party they chose not to provide any response, but the former candidate for the Soufriere constituency, Dr. Sam Christian, confirmed that he would not be contesting any position at the conference but he would like to see the grooming of new leadership. He also said that he supported the continuation of Linton as party leader.

Monell Williams-Jno. Baptiste, the UWP candidate for the St. Joseph constituency, said her her newborn baby and her pursuit of higher education prevents her from contesting any position.

"As a senior member of the team, however, I will continue to work fervently to ensure that this political party moves from strength to strength in the best interest of the people and the country," she said.

Mrs. Jno. Baptiste also revealed that her constituency is making final arrangements to participate at the convention and she looks forward to the coming together of the constituency party groups as they collectively determine the most suitable individuals for every executive position.

Several attempts to interview Linton, the current party leader, were futile. However, speaking to the Dominica Broadcasting Corporation (DBS radio) Linton hinted that he may very well be replaced at the upcoming conference.

"I have focused over the years on providing good faithful, honest leadership to the United Workers Party, but a time is going to come when someone else is going to replace me whether that time is now, maybe it is now," he said. "Politics is very fluid, you know what the concerns of the people outside there are, you know what the concerns of certain supporters of the party are, but at the end of the day this is about Dominica having the best option for leadership going forward."

Meanwhile, there has been new talk about the holding of the long-outstanding delegates conference of the ruling Dominica Labour Party (DLP).

In power continuously since 2000, the DLP has not held a delegates' conference for newly a decade.