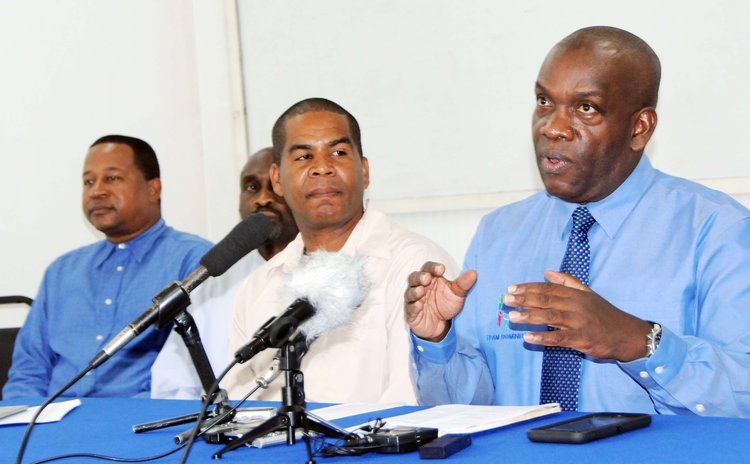 ROSEAU, Dominica. January 9, 2015 (Sun)- Retired educationist Hartley Adams, a staunch supporter of the ruling Dominica Labour Party (DLP) last week described Speaker of the House of Assembly, Alix Boyd-Knights, as the fast bowler for the DLP in Parliament. But opposition leader Lennox Linton, says Adams' metaphor is inapplicable to the rules of parliament and cricket.

"An umpire has never bowled to me so I don't know how to play an umpire," Linton said at the Prevo Cinemall in Roseau today. "I will not play if the pace bowler is also the umpire."

Linton spoke at a UWP-organized press conference to announce the names of four senators who will join the party's six elected members when parliament meets for the first time after the December 2014 general election. Linton said the 10 members will be the UWP's alternative cabinet.

"Note the word alternative because we are not shadowing 18 ministers of government," he said.

The persons named in the UWP alternative cabinet are:

A notable absence from the four senators named today is UWP deputy leader and former senator Claudius Sanford. Sanford's has lost three consecutive times in his bid to be the parliamentary representative for the UWP in the Kalinago Territory. Linton explained that Sanford was nominated in a UWP selection process but his name was rejected; this situation prompted speculation that Sanford's future in the UWP is tenuous. Linton disagreed.

But will Sanford continue waving the party's blue flag in the Kalinago Territory?

"He has made some decisions," Linton answered. "I think he is in the process of considering the best way he can continue to serve the party. That is his call."

The naming of the UWP members of parliament is Linton's first major step as he prepares to lead the UWP for another five –year stint in opposition.

And after a bitter campaign, Prime Minister Roosevelt Skerrit has asked the UWP to accept his "olive branch" so that the country can heal and move ahead. But the UWP has refused to accept that request to forgive and forget.

"We do not accept that anyone should or can dictate to us what moving forward should be," he told the press. "Moving forward for us means taking care of the things that matter for the growth and development of Dominica, one of those is free and fair elections as the backbone of our democracy. We make no excuse at all for keeping that front and centre of our agenda going forward."

Beaten 15-6 in an election that the UWP predicted it would win, Linton nonetheless said in retrospect there's not much he'd do differently in terms of campaign strategy, team selection and the financing of his party's campaign.

"We have to avoid the temptation of making compromises because this is how we lost we cannot go down that way and say we would like to win that way as well," he said.

The UWP contends that the Roosevelt Skerrit-led DLP was involved in a number of illegal activities prior to the election. But unlike previous years, the UWP did not file election petitions in the High Court and the 21-day deadline for filing has elapsed.