Lise and Hans Schilders: We loved the country and the people from day one 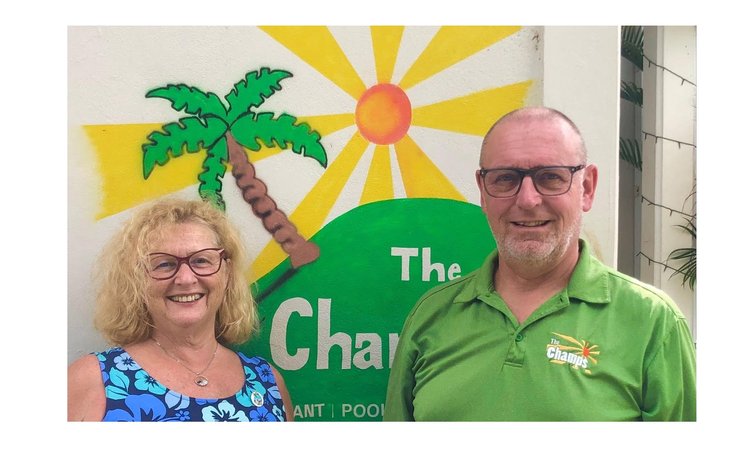 Lise and Hans Schilders from the Netherlands, are co-owners of Hotel The Champs, in Picard, Portsmouth, and have called Dominica home for the past 15 years.

The Schilders' left the Netherlands in 1994 to live in France for six years, then headed to Spain for another eight, before coming to the Caribbean and settling in Dominica.

"We first visited Dominica in February 2007 because we were looking for 'our island' where we wanted to live," Lise said. The couple visited other Caribbean islands but Dominica was different.

"Arriving on the ferry from Guadeloupe we saw an impressive, mountainous, green island. Passing through Customs was a nice experience. Our host treated us to Kubuli beer before taking us on the road full of potholes, but lovely views, to Picard, Portsmouth," she said.

The Schilders' first came to the Caribbean in 1990 and stayed in the Dominican Republic, where they considered living. But over time, that country became less appealing. The Nature Island, on the other hand, 'clicked' with them.

Lise, also General Manager of the hotel, shared that several things attracted them from the start.

"Everyone we met was smiling and friendly and proud to be Dominican. We loved the country and the people from day one," she said. Next, was to set up Hotel The Champs. This experience led to the Schilders' biggest adjustment: that things happen in 'island time'.

"We come from an over-organized country, The Netherlands," Hans explained, "We thought we had learned to take it slow with the 'French touch' and the Spanish 'mañana, mañana'. But that was nothing compared to 'island time' in Dominica."

"We live here now for 15 years," Lise continued, "and we still find it difficult to be as patient as we need to be to fit into the (non-)speed of doing business in Dominica."

"But we love the island, the nature, the people, the weather and so we accept that 'it is what it is'," they chuckled. One of the major changes to affect the couple was the loss of Ross University.

"That still is a game changer for the North. That change doesn't get the continued attention it needs, because the political dialogue has disappeared," she said.

The two are also very aware other changes in the country.

"We see the level of crime and shootings increase. Our impression is that most of this is drug-related," she said. "So many youngsters seem to fall for the income and life-style, but how many more have to be shot before we do what it takes?"

Forever grateful to live and work in the beautiful Nature Isle, it is only natural for the Schilders' to exercise their corporate social responsibility, giving back to the country they call home.

During Ross University's stint here, the Hotel hosted numerous fund raisers including for the Children's Heart Foundation. The Schilders' are also founders of the Portsmouth Rotary Club.

"That club has renovated the emergency department of the Portsmouth hospital, and we've been instrumental after Erika and Maria in front line aid, and equipping all 58 primary schools with over 3,500 new computers and IT networks. Our latest achievement is the setup of 30 new beekeepers on island," he said.

The two are well known in the hospitality sector; both serve as Board members of the Dominica Hotel and Tourism Association (DHTA); Hans was Vice President in 2019 and is currently the President. The couple makes sure to employ only local staff at their establishment and primarily source produce locally.

The Schilders firmly believe innovation and invention are needed to survive the challenges facing the country, hence "we need the young and educated Dominicans to step forward, take charge and help to work on the many obstacles that are still ahead of us."