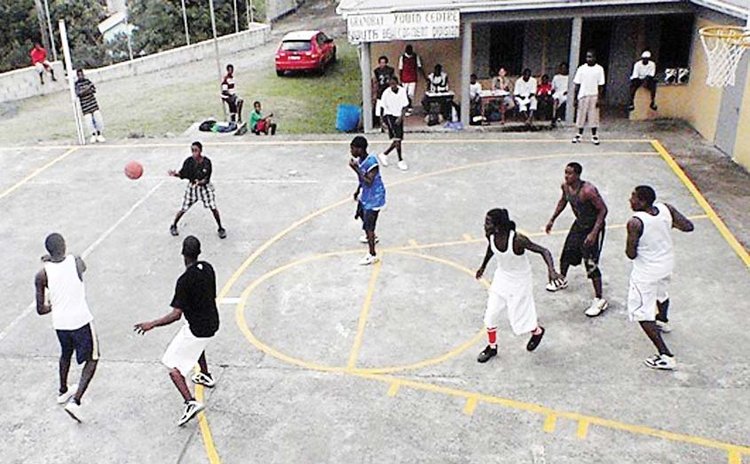 Part II of "Listwè Basketball An Gwanbé" presented the transition from Nationals to Pros - Grand Bay's first two teams to compete in Dominica's national basketball league. About 80% of that section focused on Pros.

In Grand Bay's 50 years of participation in basketball at the national level that community has fielded a whopping sixteen (16) teams distributed in 4 Divisions in the national league. This points to the popularity of basketball in Sout' City, and no other Dominican community comes close to that number of teams. In 1988, for example, five Grand Bay teams participated in DABA competitions.

As was noted earlier, Nationals, followed by Pros, competed in the national league's top Division (Division I, renamed Premier Division in 1997). Pros remained on the cards – with a couple of breaks in their participation – until 2014.

Over the years, other all-male teams from Grand Bay which participated in DABA's national league included Sixty-Sixers and Pros II in the 2nd level men's division from the 1980s. Rammers, 76ers, and Thundererz I (from 2015), also competed in that Division.

The "original" Sixty-Sixers, with players such as Bonti Liverpool, Raphael Carbon, Nicholas Christian (now deceased) and others, were a formidable force in the "Intermediate" Division in the late 1980s. They grabbed both League and Knock-Out Championships in Division II in 1988, and followed with a repeat in the 1989 League Competition with an impressive 11 & 0 Win-Loss record!

Note that Sixty-Sixers were the predecessors of Sixers.

The Junior Division and Division III saw Pros Junior (e.g. in 1976, 1977, 1978), Ogan Stars, Home Boys, Smashers (e.g. in 1988, 1989) helping to keep Grand Bay's basketball tradition alive. Furthermore, Grand Bay Primary School was one of the four teams which participated in DABA's one-off 16 & Under Division, in 1988. Julian Pacquette, who played on the Primary School team then, later became a member of Smashers, then Home Boys, and subsequently Sixty-Sixers, which he captained for a few seasons.

There are only two schools in Grand Bay and both have participated in the basketball competitions organized by the Sports Division.

On the other hand, Grand Bay's 5½ concrete strips surpass the number of courts built in Roseau over the years.

As was noted earlier, Sout' City's basketball journey began on a court constructed in two phases on the Roman Catholic Church grounds, in the late 1960s into the early 1970s.

Other courts were constructed in ensuing years at Ma Tutu's Park - with partial funding from the US Peace Corps; at Centre – close to the Grand Bay Police Station; at the Grand Bay Youth Centre; and most recently at the Pierre Charles Secondary School.

Several young men also played on a half-court at Country Garden, an old broken down hall close to Block 44 in the middle of Lalay.

Sponsorship often determines the longevity of a team, and several Grand Bay teams have been beneficiaries of sponsorship assistance from various sources. Most of the teams' sponsors had their operations in Roseau while the others come from the greater Grand Bay area.