Another hurricane season is here but people still live in danger zones in Pointe Michel, Colihaut and Coulibistrie 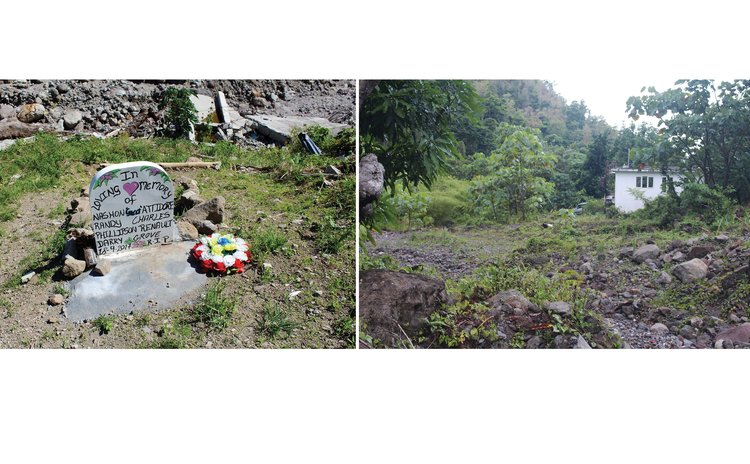 House in ravine that took many lives during Hurricane Maria in 2017; Grave of Maria victim in Pointe Michel

"I have nowhere else to live," said a villager of an area in Pointe Michel that Hurricane Maria ravaged on September 18, 2017.

And the Government apparently cannot force these seriously at-risk people out of this and other danger zones around the island.

"Without legal authority we are toothless", said Glenroy Toussaint, the Local Government Commissioner.

In terms of loss of life, Pointe Michel was among the communities in Dominica severely battered by the category five Hurricane Maria almost three years ago.

The storm left more than 17 people dead and/or missing in Pointe Michel. Many victims were swept away by ravines in Lourt Bord and Sibolie.

Although some people left the area after the storm, many still live in or near the ravine.

"I have no place to live," said a resident in the ravine of death. "I was promised a house by the government but I am still on the waiting list."

Denise Charles, the parliamentary representative for the area said she has been meeting with people in the danger zone to plan the way forward.

"We have started as you know the process of relocating people…it takes time. Some have already gotten houses. We are about to commence another phase of our house relocation," Charles said.

Charles added that people living in low lying and danger zones need to heed calls and take all precautions to save lives.

"We can't go back to 2017…we know what happen, we now need to be proactive and take the necessary measures," she said.

But no one can force the people to leave.

Toussaint, who heads the National Emergency Planning Organisation (NEPO) Shelter Committee said without legislation to deal with people in those vulnerable areas NEPO is "powerless."

"We cannot legally, as it stands now, force people into mandatory evacuation. We don't have the power and legislation to so do. As a result people who reside near the ravines have been asked to move but have not heeded that call and that's the most we can do," he said. "All we can do is inform and educate and alert the people".

Apart from Pointe Michel, there are danger zones in Colihaut, Pichlen and Coulibistrie where Hurricane Maria was most destructive and where people have resettled.

"When we have those situations confronting us, we sort of encourage people to understand," said Toussaint. "They have an individual responsibility to protect their family life and property. It's not the State's responsibility. If you become reckless then you suffer the consequences."

He continued: "We have a situation where the disaster committee went to the family in Pointe Michel on three occasions begging them to vacate. They said that Tropical Storm Ericka did not do anything to them, so they were safe and so (in 2017) they suffered the consequences, unfortunately.

"As it stands we cannot force the people, we can only educate and tell them of the consequences. Without legal authority we are toothless. We have to just work with them, asking them to be ready and prepared."