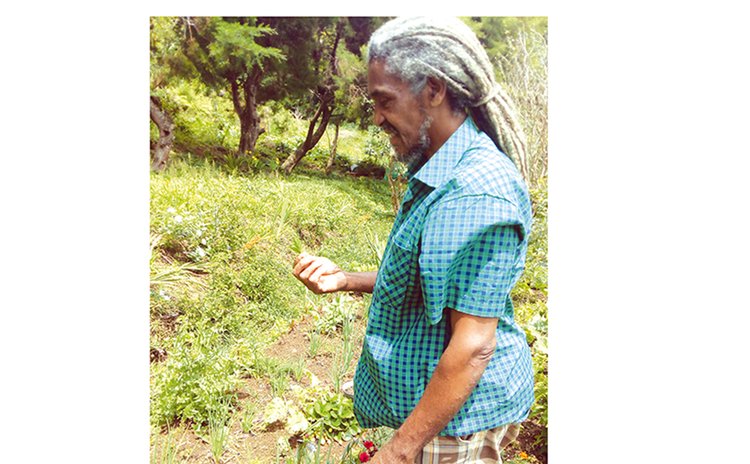 Roy Orman on his farm

Roy Ormond's and his family farms have absolutely no artificial fungicides, pesticides, weedicides or fertilizers.

The Ormonds are committed organic farmers who largely let Nature do its own pest control, and Roy is content to control weeds with his brush cutter. His horses and cows also chip in.

They are vegans, and Roy is guiding the farming enterprise towards self-sufficiency, expanded production, as well as the establishment of new markets for citrus, coffee and other crops.

He also wants to start growing sugar cane-so he can produce his own sweeteners and he intends to begin cultivating peanuts and coconuts to produce vegetable oils.

At the moment, the Ormonds cultivate various crops on their farms, such as chives, potatoes, carrots, cabbages and bananas.

According to Roy, most of his early farming activities were done in collaboration with an organic farmers group that he helped establish, which got aid in the form of financing and equipment.

However, the group is now defunct and Roy has moved on.

As a strong advocate of natural pest control, Roy said, "My principle is: watch the forest. All those plants that grow all around us, nobody sprays them.

"What causes disease is unhealthy plants… It's just like a healthy person, if you are healthy and your immune system is boosted up, a cold [would] pass and you don't get it….

"Same thing with a plant; if you have a strong, healthy plant…it will be able to resist the disease…nature provides control," he asserted.

He added, "When you spray with poisons, you kill those good insects and those [destructive] ones take over and you are in a cycle of spraying…which is very expensive and very unhealthy."

"A healthy plant will be so much bigger and its leaves so large that a caterpillar can take a nip or two and it wouldn't affect the plant," he said.

He recommends cinnamon to treat fungus on plants and neem as a natural insecticide.

Further, Roy suggests using garlic and pepper for white flies on cabbage, though he did not even need to use that remedy for his last crop of cabbage.

Roy believes many young farmers might have died from exposure to deadly chemicals used in the past for banana crops.

He pointed out that the instructions on the packages of weedicides and pesticides require extensive and expensive protective gear.

"Nobody does that," he pointed out.

With regard to fertilizers, Roy uses manure. For him, using fertilizers on plants is just like spoiling your child.

He explained that the roots of the plant do not go beyond the ring of fertilizer and become tangled clumps at that point.

"Before you know it they get too compact, and if you get a drought they will die first," he warned.

He noted that the burrowing pests that tend to infest banana plants love manure so much that they would leave the plant alone to feed on the manure instead.

Roy said he proved this during an organic banana experiment by the banana company in 2001. It involved three acres of land at his farm, with 700 plants per acre.

Roy, who was tasked with planting and maintaining the bananas, said the organic bananas took the same time to develop as the chemically treated bananas and their weight was also the same.

"The results were very good….it can be done," he maintained.

Roy is also a strong advocate of the healing properties of herbs and he has over 100 species of medicinal herbs at his Harmony Gardens farm, which he intends to expand.

Roy grows herbs that he says cleanse the body and enable it to overcome the flu and pneumonia; he also grows other herbs that can be used as antiseptics and to ease inflammation.

And he grows many others herbs that he said are effective deterrents and treatments for many ailments including pain, rashes, blood pressure problems and more.

He showed several species of mint, including spearmint, chocolate mint, water mint and apple mint as well as a great many species of basil.

Apart from herbs with medicinal properties, the Ormonds grow many exotic herbs that are good additions to the pot or can just be enjoyed in fragrant cups of tea.

In fact, based on his abundant supply of herbs, Roy plans to start producing packaged teas, as well as essential oils.

His long term objective where the herbs are concerned is to bridge the knowledge gap between the younger and older generations.

Roy is currently expanding his capacity in this area to accommodate more tourists.