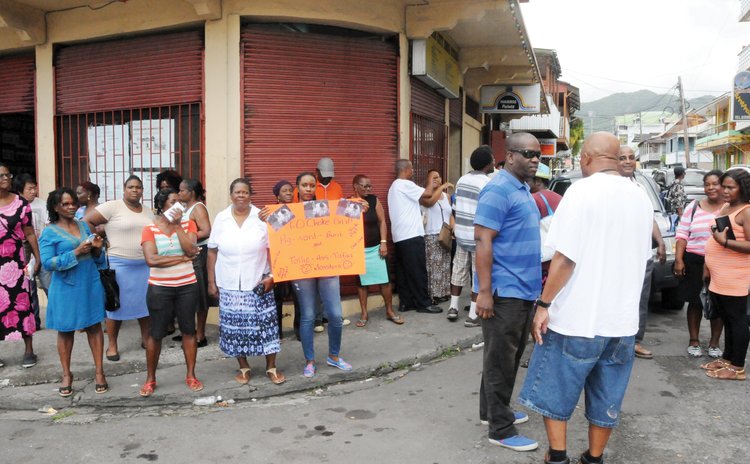 Supporters of the UWP gather outside law office to pay fine

On Thursday, Lennox Linton, the political leader of the opposition United Workers Party (UWP) and party supporters assembled outside the law office of De Freitas De Freitas and Johnson on Cork Street, Roseau where UWP supporters took turns to deliver cash to the law firm on Linton's behalf.

Earlier in January, Pinard-Byrne sent a seven-day demand letter to Linton requesting the payment of about EC$80,000, the amount that High Court Brain Cottle had ruled that Linton must pay Pinard-Byrne for damages, cost of legal services and interest in the libel case. Over two days on Q95 FM radio last week callers in a radio pledge contributed over EC$120,000 to pay these High Court charges.

"We made arrangements to have him paid today since our lawyers sent a correspondence to his lawyers indicating that during the course of the day various people will be coming to the office to pay this amount on my behalf and the people did do that," Linton said.

He said party supporters began the process about 11 am, broke for lunch, came back at 2 pm and complete the process by 3.45 pm.

Recall that Linton won an appeal to the Eastern Caribbean Supreme Court (ECSC) but Pinard-Byrne was successful at the British Privy Council. So, Linton has other costs out-standing. "He won the matter in the court and it was settled in the context of the High Court we still have the matter of the appeals court cost and that of the Privy Council cost," he said.

"We are sure that not very long we will be hearing from the court."

Meanwhile, in a press statement Pinard-Byrne said he always knew that "the defamation of Kieron Pinard-Byrne and others was carried on for partisan political causes."

The release continued: "Such despicable political defenses or admissions by a so called investigative journalist in the High Court of Dominica would /will surely result in special damages orders against him".