The Concerned Citizens Movement (CCM) President is: The Sun's 2019 Person of the Year 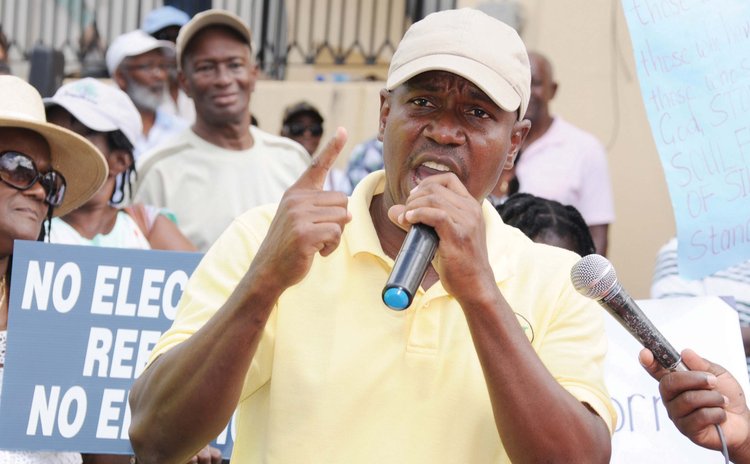 Electoral Reform is currently the most divisive and controversial issue affecting Dominica. The issue was thrust front and centre during the just-ended 2019 general election campaign. And Loftus Durand, the president of the Concerned Citizens Movement (CCM) was the general leading the troops.

So far, he and others have not succeeded. Despite their best efforts Prime Minster Roosevelt Skerrit called the 2019 election without the basic electoral reforms that the opposition was demanding-voter identification cards and the cleansing of the voters' list.

In fact the government, through its spokesman Anthony Astaphan, described the demands for electoral reform from various groups, including the CCM, as "speculation, misinformation and (is) unquestionably astonishing".

But whatever happens to the electoral reform movement in the future Durand will be remembered for the important part he played.

"In 2014 we formed the Concerned Citizens Movement, and the idea was to chant down injustices wherever it happens. There were certain practices that were creeping in, in terms of the manipulation of laws, the court system, and it didn't sit well with me, in terms of ethics, morality, even spirituality", said Durand in an exclusive interview with the Sun.

"Way back in 2005 when Roosevelt Skerrit ran as PM for the first time, there were some irregularities, but in could pass. In 2009 it multiplied. I remember seeing, for the first time in Dominica, one billboard made from eight sheets of plywood. And you have so many people who (live in poverty) and to have this kind of lavishness, coupled with lack of access to media, so it really started to take a toll that I realised that if I don't do something for my country, according to the old people something will do us".

Some of the founding members of the CCM were Michael Coipel, Theresa Gabriel, Jana St. Aimee, Maureen Abel, Tyron Anthony, and others.

"We went into the various constituencies telling people about their rights in terms of free and fair elections. People scorned at us sometimes but we kept at it. There were somethings we didn't know very well, in terms of the legal aspects, so we made our mistakes, but now we have a legal person," Durand said. "We still have a long way to go in terms of the reform but people have a better idea of reform. Other bodies have since come abroad, lending their voices to our voice and it made our voice much bigger".

Durand admits that "we are not there yet in terms of the agenda we're pushing but the Prime Minister in his first address after the 2019 election said in his first 100 days he'll look at the reforms. We don't know if it's true or not, but he said it and we'll hold him at his word".

Durand said the CCM is gearing up to expand its base and the issues it will take to the people. But Durand plans to give up the leadership by year end.

"I'll still be a member, but after a number of years at the helm it's time for a change', Durand said.

Because of his extraordinary achievement in community mobilization and advocacy and the awareness of electoral reform that he has endangered in Dominicans far and wide and in the rest of the region, Loftus Durand is the Sun's Person of the Year.

This year, as in the past, we selected our Person-of-the­Year by an analysis of the news and by consultation with key individuals in the business of collecting and processing media reports on the year's main events.

Our choice, as always, is the person, institution or organisation that stands out as a significant newsmaker during the year. Our Person­ of-the Year should, for better or for worse, have affected the lives of a large majority of Dominicans. Loftus Durand of the CCM did.