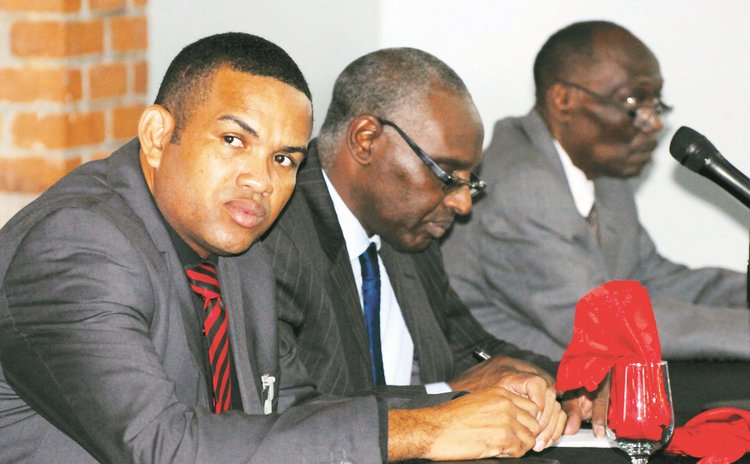 Mon 9 March 2015 – It came seemingly from out of nowhere, sneaking in like a spiv – or more appropriately- a thief under the cover of darkness.

It slunk through in the form of two simply letters.

That was "Marvlyn Pascal" in a first attempt at a conversation with me via Facebook.

I've been Facebook "friends" with Ms. Pascal for several weeks, maybe months, and never before did we converse. So this attempt at engagement seemed somewhat odd.

Then it happened. Without any semblance of tact or caution. "Did you receive money from the IMF and World Bank?"

This was an unexpected detour, but a brazen one designed for rending the pocket and rendering cash.

"I got $US40,000 from them to pay bills. You can get it too." There was an unpleasant feel to it as "Marvlyn Pascal" shared a link to another timeline on Facebook and aggressively pushed to contact this person.

"Try to message him now and wait to hear back from him because he dont take long to reply back."

The name on the timeline is Scott D. Davis and there's a photograph of D. Scott Davis, the non-executive chairman and former chief executive officer of the global package delivery company, UPS, who retired from his executive post on 1 September 2014.

"Good day, this is Scott D. Davis, the UPS chairman and the chief executive officer. How may I help you" The message came up as soon as I clicked on the link. All caps and no question mark. What followed was a series of attempts to prod and push me – almost always in full capital letters and poor grammar and spelling – to divulge personal information and take advantage of this "opportunity".

According to this Scott D. Davis, it was a US government programme to help ease "the recent increase in unemployment, poverty, humanity eradication in the country and your name is among the people to receive $40,000." Every "beneficiary" is chosen at random, he said.

Seemingly frustrated by my persistent questioning and refusal to share information, the perpetrator finally screamed (mostly in all caps) that there was no reason to worry.

"You have no problem with us here, many people have gotten their cash from already and they have all come to said thank you. This is legitimate backed by the federal enforcement agencies with support from the federal bureau of investigations against any form of fraudulent act. You are safe."

There ended the attempted fraud. However, things didn't end this well for a co-worker of the real Marvlyn Pascal, whose FB account had been hacked and was being used to lure unsuspecting friends to part with their money. This co-worker (name withheld to protect her identity) fell for the scam and was fleeced of $5000 in the process.

"She sent the money to a person name Davis Scott in Nigeria," Ms. Pascal said of her co-worker who she said became ill as a result and had to seek counselling. This woman, a mother of three, was told she would get US$40,000 to help with her bills but she first had to send $5000 to process the transaction. Since she didn't have all the funds she borrowed half of it.

"She cries every day," Ms. Pascal said of the co-worker who she supervises at the Princess Margaret Hospital (PMH).

"(I) am always crying, am asking myself why this girl did not come to me first before she sent that money," she added in an interview with The Sun via Facebook, saying the entire episode had left her depressed.

Asked what message she had for people who might be tempted to fall for similar scams, she said:

"I will say to them to be careful all that glitters is not gold." It's this very glitter that is being dangled before the eyes of millions of people around the globe in what is described as Nigerian 419 Advance Fee Fraud scams. And people are becoming more gullible, with victims losing US$12.7 billion in 2013, and US$82 billion overall, according to the research company, Ultrascan AGI in its 2013 report released in July 2014. In 2012, losses totaled $10.9 billion, up from $9.6 billion in 2011. Individual losses range from US$200 to US$12 million.

According to the report, over 800,000 perpetrators are involved in this racket globally, with "too many to count" in Nigeria, and an estimated 85,000 from the Nigerian Diaspora spread across 69 countries.

It's called Nigerian 419 scam because the method originated in Nigeria and 419 is the number of the article in the Nigerian Criminal Code dealing with fraud.

The more common method involves the sending of emails offering large sums of money or stating that you have won the lottery – even though you never bought a lottery ticket – but that to receive the funds you must pay a fee in advance. However, you'll also find them on your smart phone, in chat rooms, Twitter, Facebook, dating websites, and internet gaming, among others. According to Ultrascan AGI, high-achieving professionals like lawyers and doctors are the easiest to scam.

This appears to be the case here as hundreds – and possibly thousands – of Dominicans take the bait. And many of them do it stubbornly, according to Corp. Patrick George of the Financial Intelligence Unit of the Commonwealth of Dominica Police Force. Corp. George cited several examples of individuals who insist of donating to the Nigerians despite warnings from the police.

In two other cases, one person lost $20,000 in the lottery scam and an elderly man parted with $30,000 despite police intervention. "(They) did it although we advised (them) against it. Some of these persons, they don't really cooperate…And those who cooperate with us, most times it's after the fact," Corp. George told The Sun.

Then there's the case of a government official, who, despite repeated attempts by the police to stop him, took the most drastic action in an effort to collect his piece of the pie in the sky. "The worst case we had in Dominica, a government official, a regulator, he travelled all the way to Africa to get this money. Despite telling him it's a scam, he paid his money and he went to Africa to collect the funds against our advice," the FIU official revealed. "When he got there no one was there to meet him."

Corp. George has advised anyone who receives such offers to immediately delete the email, or as was the case with Marvlyn Pascal's Facebook account, seek confirmation, and to contact the FIU.

After all, these offers of large sums of money can sneak in from out of the blue and leave you with no money at all.