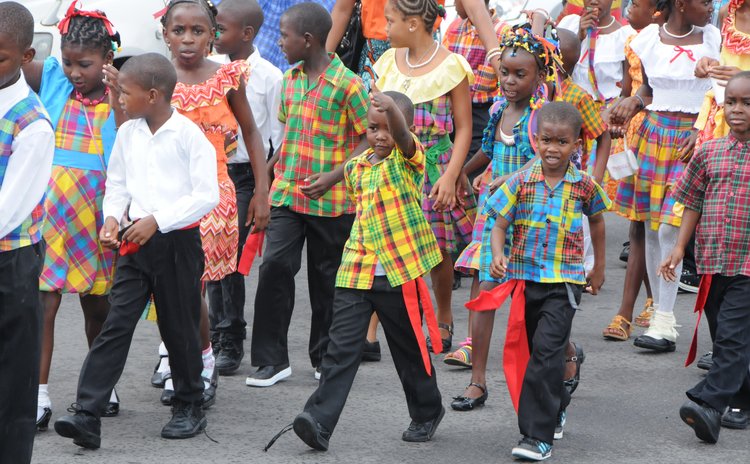 Here's where we were in 1978: failing agriculture; insignificant manufacturing; a tourism industry not even on the horizon; a partially literate population; an inappropriate education system and two political parties fighting over that small cake called Dominica.

Here's where we are in 2018, forty years later: a failing agricultural sector; little or no manufacturing; a tourism industry still in its embryonic state; a politically illiterate population in need of freedom from mental slavery; an education system where too many graduate from secondary school unable to read, write or reason; a country where frequent mega storms, fueled by climate change, pound weak infrastructure; and an independent state where three political parties are continuously fighting over the small and shrinking cake called Dominica.

Yes, we have taken a few steps forward since independence 40 years ago. But let's consider this question free from politically tinted glasses, how many strides have we made backwards since 1978?

As the country prepares to celebrate its 40th anniversary of Independence, Dominica is undoubtedly enduring its worst crisis since 1978.

But before Hurricane Maria made the situation worse, Dominica had been virtually crippled by a dying economy, sky-scraper-high unemployment figures, human-resources-hemorrhaging migration rates, escalating crime, unproductive agriculture, shrinking exports and ballooning imports, and shamefully high levels of non-communicable diseases that Dr. Carissa Etienne, the Director of the Pan American Health Organisation (PAHO) once described as an impending tsunami.

Nevertheless, despite these mountains of problems we have made some positive progress over the last 40 years. This is most evident in areas of culture, sports, music and education. But if we are honest with ourselves, we will agree that countries like St. Lucia that attained independence about the same time seem to have left us breathing their exhaust fumes on the highway towards economic independence.

As we reflect on the past 40 years as an independent country we need to ask these questions: What are the reasons for our failures? Why the social breakdown manifested in violent crimes and the delinquency of our youth? Why do many citizens feel that politicians, and others in authority, have failed to represent them or have betrayed them? Why do we distrust the institutions of the State such as the police, the courts, the Electoral Commission and the Cabinet? Why is there so much corruption that it now looks as normal as sunshine? Why is the pace of progress so snail-like?

Unfortunately, we observe Independence in the middle of the toughest economic conditions that this young nation has encountered over the past 40 years. These predicaments have posed severe challenges to our proud and independent people who have witnessed the slow but complete ruin of our economy over the past decade and more. If we are to progress, Dominicans must confront the nightmare of having to live in an economically devastated county in which thousands find it extremely difficult to earn a decent standard of living.

Additionally, as we quantify our unfinished work we will understand that much more has to be done if we are to consider ourselves independent. Of course, independence celebrations generate a certain level of patriotism but patriotism is much more than raising flags or standing at attention for the National Anthem.

Patriotism means respect for self and others and for country. It requires an acknowledgement of the current social and economic conditions and a determination to partner with everyone to pull ourselves up by our own bootstraps. Patriotism has no political colour.

As we observe independence on November 3rd 2018, we must remember that the struggle for economic emancipation has just begun. Obviously, it is much more difficult to obtain economic independence than to break the chains of colonialism.

Over the past 40 years, we built many schools and implemented universal secondary education so that many more children have access to secondary and tertiary education. Nevertheless, the quality of the education that our schools now deliver is questionable. Again, we built roads but maintaining them has been a major budgetary challenge; we built many health centres and clinics, especially in rural Dominica but today basic health care is beyond the reach of many citizens because of raising costs. We trained many teachers, nurses, doctors and other professionals but they continue to migrate in search of greener pastures.

In agriculture, the basic industry, during the past 40 years we subdivided large estates, such as Geneva and Castle Bruce, so that many more persons could have access to land but agricultural production and productivity decreased on these estates in spite of the fact that modern agricultural technology, such as irrigation, fertilizer and pest control are available to small farmers. Today, agriculture needs major reconstructive surgery if it is to contribute meaningfully to the growth of the economy.

Undoubtedly, we are at an important cross-road on this the 40th anniversary of our Independence. The point is we can either grasp the opportunity for real change, for economic development, for justice, equity and fairness for all or we can continue to allow persons to persuade us that we are better off than we really are.

The first stage towards economic rehabilitation is a recognition that we are the poorest state in the Eastern Caribbean. The second stage is to plan to fix the situation before the end of the next decade when we will celebrate our 50th anniversary of independence.