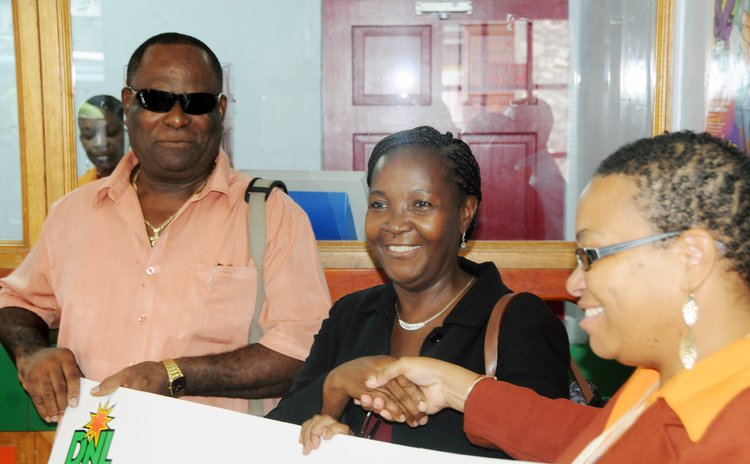 It hardly gets bigger than that. One hundred thousand dollars is enough to make almost everyone jump for joy. But not Archibald Samuel, the winner of the Dominica National Lottery (DNL) highest pay-out, to date, in the Big Four game.

"I don't use the word excited because I've been trained to control my emotions," said the former police officer. "Let's just say that I'm happy."

Samuel said he has been telling friends that his big pay day will come soon "because I don't play small and I played every day" from March 2013 when the game was introduced in St. Lucia and Dominica. Samuel's winning ticket cost just twenty dollars.

Although he was the one paying out the cheque, Ken George, the DNL marketing officer said he was happy too as he handed over the cheque at the DNL head office in Roseau on Thursday.

"It's an extremely exciting moment for us at the Dominica National Lottery," George said. "This is the first time we have ever had such top winners in the Big Four neither in Dominica nor in St. Lucia." Andrea Fountain of Grand Fond was the other winner; she won $10,400 from a ticket that cost just $4.

"I too started playing from the beginning but not as big as my friend here," she said, adding that Samuel influenced her to play her winning numbers when they spoke while purchasing tickets at the Wine Store on Great Marlborough Street, Roseau.

Samuel said his winnings will go towards travel and retirement expenses.