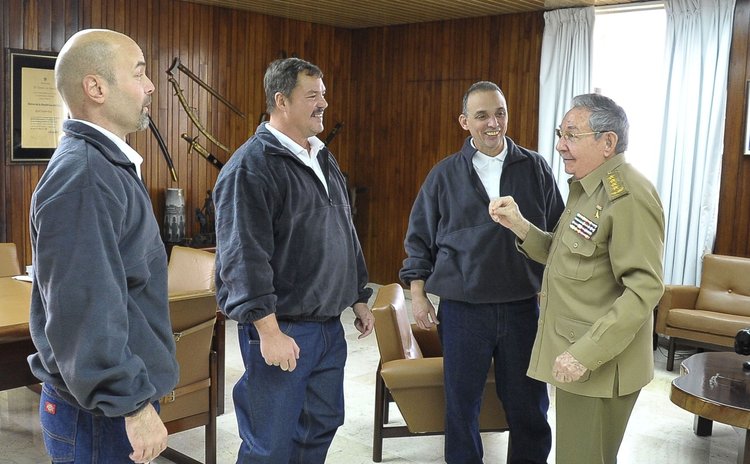 Cuban President Raul Castro (1st R) talking with three of the Cuban agents called The Five, released by the United States of America, in Havana, Cuba.

CARACAS, Dec. 26 (Xinhua/Sun) -- Venezuelan President Nicolas Maduro said the recent rapprochement between Cuba and the United States is a sign of changing times in Latin America.

In a letter to Cuban leader Raul Castro published Friday by Cuban media, Maduro said the Dec. 17 announcement that the two countries had agreed to restore diplomatic ties was the result of political changes in Latin America.

"There is still a long way to go before Washington acknowledges that we are no longer its backyard," wrote Maduro in the letter dated Dec. 20, citing the term often used by U.S. legislators to refer to Latin America.

"However, I believe that it (the rapprochement) is a highly important step in order for the United States to understand that here, in our land, there has been a change of epoch, that (Latin America) has changed forever and will not backslide," said Maduro.

He also hailed the release of three Cuban prisoners by the United States.

The prisoners were arrested in Miami, Florida, in 1998 and handed lengthy prison terms for spying on right-wing Cuban exile groups intent on overthrowing Cuba's Communist government.

The release of the prisoners closes "one of the many shameful chapters in interventionist and criminal U.S. policy," said Maduro.

The prisoners were members of the so-called Cuban Five, two of which had already been released after completing their sentences.

Photo: HAVANA, Dec. 19, 2014 (Xinhua) -- Image provided by Estudios Revolucion on Dec. 18, 2014 shows Cuban President Raul Castro (1st R) talking with Gerardo Hernandez (1st L), Ramon Labanino (2nd L) and Antonio Gonzalez (2nd R), three of the Cuban agents called The Five, released by the United States of America, in Havana, Cuba. The United States and Cuba announced Wednesday that they have agreed to restore diplomatic relations, in a move to end more than half a century of estrangement between the two countries. (Xinhua/Estudio Revolucion) (vf)