Maduro: Venezuela will not reopen border with Colombia unless peace is restored 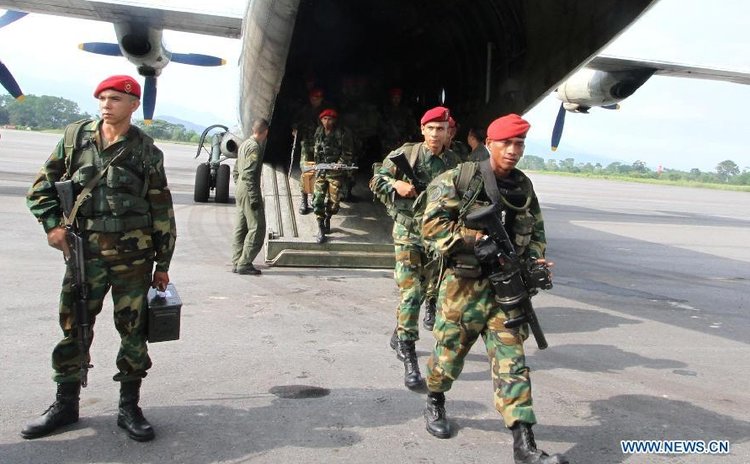 Venezulean soldiers at border with Colombia

CARACAS, Aug. 22 (Xinhua) -- Venezuelan President Nicolas Maduro said Saturday he would not reopen the border with Colombia until normality, peace and law are restored in the territory.

The president, while carrying out government activities in the eastern state of Anzoategui, said that closing the border on Friday was a responsible act and a protective measure for the Venezuelan people.

Elaborating on the reason behind the closure, Maduro said that some ultra-right Colombians are undertaking activities against Caracas' economy in an attempt to generate instability and provoke an overthrow.

Maduro denounced recent maneuvers executed by smugglers and paramilitaries around Venezuela's border with Colombia in the western state of Tachira.

Among these maneuvers, Maduro highlighted an attack carried out by Colombian criminal gangs that wounded three troops from Venezuela's National Armed Forces while they were patrolling the area.

Maduro also confirmed that Foreign Minister Delcy Rodriguez will meet with her Colombian counterpart Maria Angela Holguin on Wednesday to discuss and put in place peace and security mechanisms at the border.

On Friday evening, Maduro declared a 60-day state of emergency in the municipalities of Bolivar, Urena, Junin, Capacho-Libertad and Capacho-Independencia, all within the state of Tachira.

Despite the application of this measure, a humanitarian corridor was opened in the area on Saturday. The corridor is dedicated to allowing people with special health situations to pass, said Jose Vielma Mora, Governor of Tachira and head of a special border zone in the area.