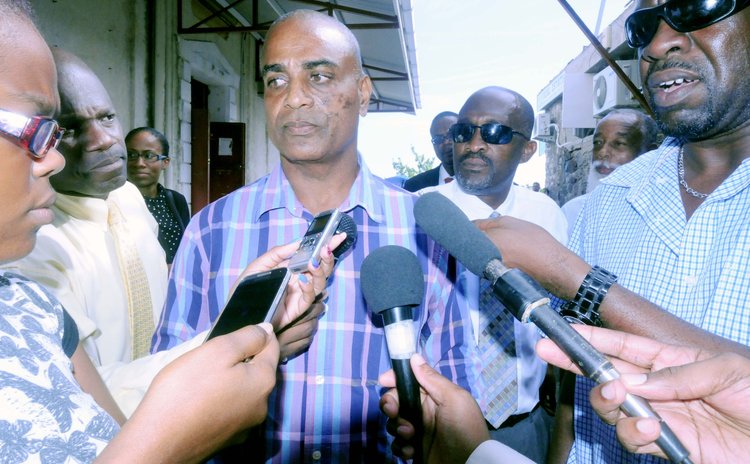 FILE PHOTO: Lugay speaks to the press just after he was charged last July

Danny Lugay, the Parliamentary Representative for Roseau North, was back in court this morning but he has to return in July to answer charges of threatening to murder a member of the Electoral Commission.

Magistrate Bernard Pacquette ruled against a no-case submission from Lugay's lawyers and instead set a July 27, 2015 date for the preliminary inquiry.

Lugay plunged into hot oil on 3rd July, 2015 when he said at a meeting of the opposition United Workers Party (UWP) in Soufriere that if he wasn't a Christian he would kill Senior Council Alick Lawrence.

Lugay, then a Senator in the Dominica House of Assembly, apologised publicly for uttering these words but he was charged for inciting murder and was placed on an EC$ 8,000 bail. He was subsequently suspended from parliament.

But victory at the polls do not automatically erase court cases, so the charge remained and the case continued this morning. According to his lead attorney and UWP MP for Roseau South, Joshua Francis, when Lugay appeared before Magistrate Pacquette today for the third hearing, the matter was adjourned because the office of the Director of Public Prosecution was not ready to present the case.

"Well we appeared that is the third hearing and the matter adjourned because the Director of Public Prosecution's (DPP) office which has conducted the matter communicated to the court indicating that the Danny Lugay file is still under scrutiny which will mean that the DPP's office is not ready to prosecute," stated Francis.

Francis added that along with his colleague on the case David Bruney he asked for the matter to be dismissed since Lawrence has not shown any interest in the matter.

"Usually the practice is when a matter comes up at least three times and the prosecution is not ready, particularly where the prosecution would have breached court orders, then the magistrate exercises discretion and strikes out the matter."

Francis said that his team attempted to get magistrate Pacquette to agree that July would be the final adjournment.

"Meaning that if we appear on July 27, 2015 and the prosecution is not ready then the court should dismiss the matter but that did not happen," he stated.

Francis stated that during the court session Bruney raised the point that "the prosecution has an important role to play and that role is to be administers of justice and should not go all out to prosecute; they should be fair and balanced, hence the issue of disclosure to be considered in favour of Daniel Lugay.

"So all in all what transpired here today was not surprising; however, we were confident that the magistrate would have struck out the matter but that did not happen.

"So hopefully on July 27, 2015 this matter would come back here and the prosecution is not ready we are going to make a further application for the matter to be dismissed." Depending on the outcome of the case, there could be political instability in Roseau North since Lugay will lose his seat if the case is decided against him. Convicted persons cannot seat in the House of Assembly, the Constitution clearly states.