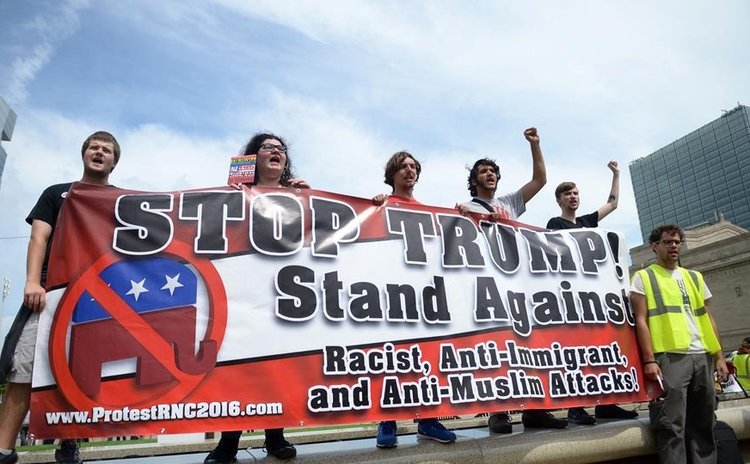 CLEVELAND, the United States, July 18 (Xinhua) -- Republican National Convention for the 2016 U.S. election kicked off on Monday with absence of high-profile party leaders as Donald Trump was scrambling to showcase his ability to unify the party.

Relations between Trump, the presumptive GOP presidential nominee, and party leaders were constantly strained during the chaotic primary season where the bombastic and bellicose candidate hurled insults at party establishment and alienated a wide swath of constituencies with controversial remarks.

Long before the GOP convention, lasting from July 18 to 21, four previous GOP presidential nominees, namely George H.W. Bush, George W. Bush, John McCain and Mitt Romney had already announced that they would not attend the GOP national convention where Trump would be formally nominated as the party's standard-bearer.

While the two Bushes, the 41st and 43rd former U.S. president, did not attend the 2012 GOP convention in person, they appeared that year in recorded messages in which they showered praise on that year's GOP nominee Romney.

According to an earlier statement by Bush senior who endorsed every Republican presidential nominee for the past five election cycles, for the first time since his own presidency, the 41st U.S. president "is retired from politics," and had no plan to endorse Trump this year.

Bush junior, meanwhile, also had no plan to "participate in or comment on the presidential campaign," according to an earlier remark by his personal aide.

In contrary to the silence from the Bushes, Romney had for long been a vocal critic of Trump and once played a major role in the "Never Trump" movement within the party early on. Romney's absence was also a rare break from the party's tradition of having the last nominee delivering a major speech at the convention.

Compared with others, Kasich's decision to dodge was even more conspicuous since the convention was being held in the state where he was the governor.

The Trump campaign on Monday blasted Kasich and other party leaders who did not appear at the convention for belonging to the past.

"He (Kasich) is making a big mistake," said Trump's campaign Chief Paul Manafort in an interview with MSNBC. "Most of the Republicans who aren't coming are people who have been part of the past."

Trump first drew widespread criticism last June when he said in his presidential announcement speech that Mexico was sending "rapists" and drug dealers to the United States. Since then, he had repeatedly vowed, if elected president, to deport about 11 million undocumented immigrants in the country.

In another outburst of emotional remarks, Trump called for a "total and complete" ban on Muslims entering the United States in the wake of the Paris terrorist attacks in November 2015.

Since then, the targets of Trump's insults expanded to include women, African-American protesters, family members of rivals, etc.

His audacious remarks not only caused wide division among the Republicans, but also among the Americans.

Even before the arrival of Trump at the Republican National Convention for the 2016 U.S. election, tumult broke out on the convention floor and delegates erupted in competing chants in a televised dispute Republican leaders had hoped to avoid.

With the theme of the night "Make America Safe Again" against the backdrop of violence and unrest in the United States and throughout the world, whether the four-day GOP convention can achieve party unity remains a question.