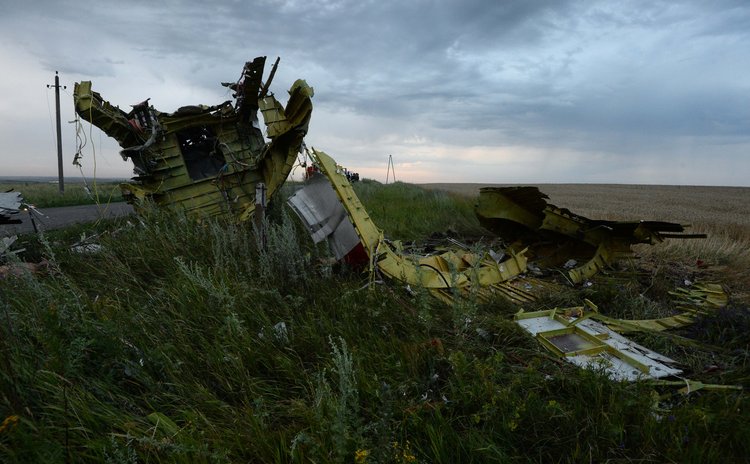 KIEV/MOSCOW, July 17 (Xinhua/Sun) -- A Malaysian flight crashed Thursday in eastern Ukraine near the Russian border, with all the 280 passengers and 15 crew members on board reportedly having been killed.

"A Malaysia Airlines Boeing 777, which was flying from Amsterdam to Kuala Lumpur, started descending 50 kilometers before entering Russian airspace, and was subsequently found burning on the ground on Ukrainian territory," Interfax news agency quoted an aviation source as saying.

The plane disappeared from radar at an altitude of 10,000 meters and then crashed near the city of Shakhtarsk in Ukraine's Donetsk region, it said, citing Ukrainian law enforcement authorities.

An advisor to Ukrainian Interior Minister Anton Herashchenko wrote on his Facebook that "280 passengers and 15 crew members have been killed."

A Xinhua reporter was stopped by local militias some 5 km from the crash site, and was asked to wait for permission to move closer. Witnesses said they heard loud explosions and saw human remains and identity documents scattering around.

The Chinese Embassy authorities in Kiev maintained close contact with Ukrainian partners, and were verifying information on any potential Chinese casualties, an official told Xinhua.

Ukrainian President Petro Poroshenko said the plane could have been shot down, but the Ukrainian Armed Forces had nothing to do with it. Prime Minister Arseny Yatsenyuk said the government has formed a special investigative commission for the incident.

The Ukrainian Prosecutor General's Office said law enforcement authorities could not access the crash site for investigation, as it is controlled by the self-proclaimed Donetsk People's Republic (DPR).

Russian President Vladimir Putin Thursday informed U.S. President Barack Obama via telephone of the plane crash, and "had a detailed discussion on the acute crisis in Ukraine," the Kremlin press service said in a statement.

Putin said both of the conflicting sides have to cease fire immediately, and Russia had taken measures to resume consultations of the contact group "with participation of representatives of southeastern Ukraine."

The president has also offered his "deep condolences" to Malaysian Prime Minister Najib Razak over the deadly incident.

The cause of the crash was yet to be determined, but Kiev and eastern separatists have traded accusations over the responsibility. Kiev authorities said the militias shot down the plane with a Buk air defense system.

Meanwhile, Andrei Purgin, first deputy prime minister of the DPR, said they "simply do not have such air defense systems, our MANPADs have a firing range of only 3,000 to 4,000 meters," Interfax reported.

Purgin said they will give the plane's flight recorders to Moscow for testing.

"Of course, we most likely will give them to the Interstate Aviation Committee (IAC), to Moscow. High-level experts, who will be able to determine exactly the reason of the catastrophe, work there," he said.

The crash came on the same day the DPR separatists claimed they had shot down two Ukrainian warplanes, an An-26 transport jet and a SU-25 fighter, which Kiev laid the blame on Russia.

Malaysia Airlines said in a statement it had received notification from the Ukrainian air traffic control that it had lost contact with flight MH17 at 1415 GMT, some 30 km from the Tamak waypoint, approximately 50 km from the Russia-Ukraine border.

Malaysian Prime Minister Najib Razak said Friday on his twitter account that he was "shocked by reports that a Malaysian Airline plane crashed," adding that they have launched an immediate investigation.

Meanwhile, Malaysian Deputy Foreign Minister Hamzah Zainuddin said that his ministry was working closely with the Russian and Ukraine governments on the tragic incident.

"We are working closely with both governments to get information," he said, adding, "currently we have some of the information, only waiting to be verified."