Marcus Malcolm Dupuis: Consumed by his love for bikes 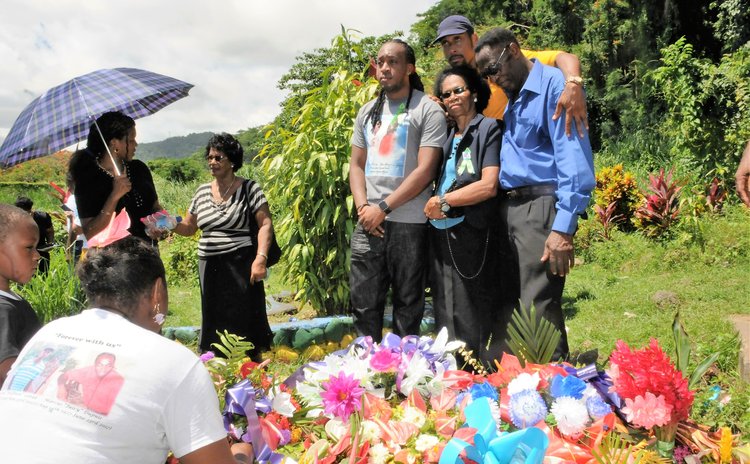 Family of Marcus Dupuis at the funeral

As the sun sprinkled molten heat on Saturday morning, the families, friends and members of the "One Life to Live Motorcycle Club" gathered at the Roseau Public Cemetery to say farewell to Marcus Malcolm Dupuis and Kareem Labad.

But the mourners did not really come to say goodbye: many wore white, black and green t-shirts embossed with the words "Forever with us" and a young man uttered, as men lowered the coffin into one of the graves: "Come back alive tomorrow."

Even the grave-digger who threw a bag half-filled with something into the grave, on top of the coffin.

"What's in the bag," a reporter asked.

"Gold and silver," he answered.

"You doh believe me. Go and ask him," the grave-digger said pointing at the grave.

Dupuis, 39, and Labad, 21, died in an accident under the Canefield Cliff on 23 June 2017. The accident occurred at about 8.45 pm along the E.O. Leblanc Highway close to the Lyndhurst Funeral Home at the junction of the road leading to the Hummingbird Inn. The accident involved a Mitsubishi pick-up truck which was traveling northwards and a motorcycle traveling in the opposite direction which was carrying Dupuis and Labad, both from Canefield.

Here is the eulogy of Marcus Dupuis printed in the Thanksgiving Service booklet.

"Marcus Malcolm Dupuis, also known as `Ju-C', 'Bob' and 'Ran', was born on August 14, 1977. It was a bright Sunday morning which heralded the birth of this bouncing baby boy to his parents, Mr. Randolph Dupuis and Mrs. Joyce Dupuis. He was their third child and was also welcomed by his other siblings, Joycelyn, Alma, Bertina, Sonia and Karen. And when his baby brother Craig was added to the family, they were inseparable growing up.

"From the beginning, Marcus was very active and a ball of joy to be around! It was noted that he loved the outdoors from a very young age and as he grew older, especially into his teens, it was difficult to keep him in.

"Marcus began his educational journey at the St. Alphonsus Pre-School. He later moved on to the St. Mary's Primary. When the family moved to Canefield in 1986, he was placed at the Massacre Primary School which also served the Canefield Community. Following his tenure at that school, he later attended the Goodwill Primary School. He completed his educational journey at the Clifton Dupigny Community College.

"This young man who loved the great outdoors eventually joined the working force. He was employed by a number of companies throughout his young life, which included Benjo Seamoss, Arden Sound System and also the Cultural Division where he made a great mark. Marcus was last employed at O.D. Brisbane and Sons, Ltd., before his untimely death. Ironically, it was at his last job where he displayed the keenest dedication to work. In general, he was a dedicated worker who gave his utmost to his employers and gained respect along the way.

"Marcus had a unique ability to draw children to him. They loved him tremendously in return. He was like the pied piper, with one difference; he never took any children away. He was very open-hearted to them but yet he would correct them when necessary.

"Many of Marcus' friends have commented on his love, his generosity in giving even to the shirt on his back, never expecting anything in return. He was a friend to many, a good confidant who would offer a shoulder to lean on. Others have also mentioned his kindness, his willingness to hug and give an encouraging word. They declared that his magnetic personality caused people to gravitate towards him.

"Marcus had various hobbies which included music, football but many will agree that he was most captivated by his great love for bikes. After being taught to ride by his friend, Dickie Rabess, he was hooked. It became a natural way of life for him. And though he acquired a few scrapes here and there from a number of accidents, still, he was consumed by his love for bikes.

"Marcus belonged to a very large family which included not only the Dupuis Family but the Gordons, Toulons and Fabiens. He was committed to his girlfriend Celine and family and always tried to ensure that those he loved were okay, before thinking of himself. Kareem was particularly close to him—he was like a son to him. People would exclaim, "They are like Tom and Jerry!"

"We are grateful to God for blessing us with Marcus, although his lifespan with us was brief. He made an impact in one way or another in each of our lives. We do not know why he was taken away so soon but his parting has taught us that life is but a vapour and time is gold, each moment is precious, and we must take every opportunity to express our love and care for our loved ones and never forget that we are simply passing through. His parting has also taught us that we must never take life for granted but must seek to know God's Will for our lives and live to please Him, the Creator of us all.

"Marcus was loved by so many. His family is astonished a d have been humbled by such outpouring of love upon their son, brother, uncle, and father. Many persons were blessed by his presence in one way or another, and we will never forget him. He will be missed by many. His legacy will live on through his dear daughter Qudisyah".