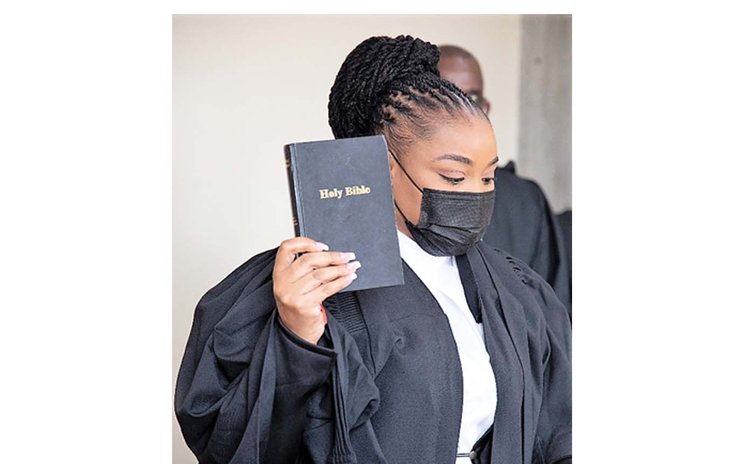 Dominica welcomed its newest Attorney-at-Law, on Friday 22nd October. Ms Marie Louise Pierre-Louis of Layou is a recent graduate from the Hugh Wooding Law school doing exceptionally well and landing a spot on the Principal Roll of Honour.

The petition to have Pierre-Louis admitted to practice was put forward by Lennox Lawrence of Platinum Chambers and Ms Dawn Yearwood of Dawn Yearwood Chambers.

Pierre-Louis is the first Attorney-at-Law from Layou and the first student for the Hugh Wooding Law School to be called to the Bar in Dominica virtually.

The call was made before Madame Justice Bernie Stephenson.

Pierre-Louis said a special thank you firstly to God and to her parents Waddy Pierre-Louis and Crescentia Angol and the rest of her family for their love, support, and prayers.

She also thanked the Government of Dominica for all the financial contributions given to her during her studies. In her first address to the court gave an undertaking to: uphold the rule of law and her ethical obligation to the court, counsel and clients; serve with integrity and dignity and to maintain a level of integrity which this profession demands and will not do anything that will bring her reputation, that of the court or the profession into disrepute.

Justice Stephenson in addressing the newly admitted attorney to at all times put God first; serve with the dignity, civility and respect is what is expected from a lawyer; what you say and what you sign guarantees trust for you are now an officer of this court

Justice Stephenson challenged the young attorney "to work hard and take it to the next level of the standard of work that is expected from an attorney".

She is currently pursuing a master's degree in legislative drafting.

( Edited from a report by Jessica Paul)