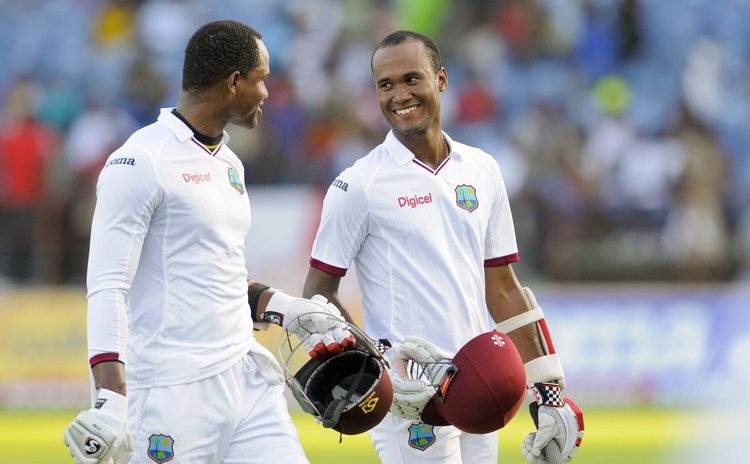 Marlon Samuels, left, and Kraigg Brathwaite are all smiles at the end of day four

Jamaica and West Indies cricketer Marlon Samuels on Wednesday slapped a defamation case against Geoff Lawson as well as Australian news publication news.com.au for comments accusing him of having criminal links in his home country of Jamaica, F. Sports reported today.

Quoting The Indian Express the website said Lawson, a former Australian pacer, made statements in a radio podcast 'Big Sports Breakfast' that accused Samuels of having criminal ties in the Jamaican capital of Kingston, and that the West Indian batting all-rounder was someone that one shouldn't mess with.

In his lawsuit Samuels has filed a case of defamation against Lawson, the talk show as well as news.com.au journalist James Matthey.

Official ICC statements have said that Samuels does not have a criminal record nor has been the subject of any criminal investigations, the website stated.

Quoting Samuels the website said: "Through this case, I intend not only to defend my integrity and my image as a international cricketer but also the values I have defended all my career.

He said the funds obtained from winning the case would be donated to the 'Marlon Samuels Society for the Blind' in Jamaica.

Samuels has had several conflicts with Australian cricketers in the past including Shane Warne.

After the ICC World T20 final as he accepted the Man-of-the-match award Samuels said: