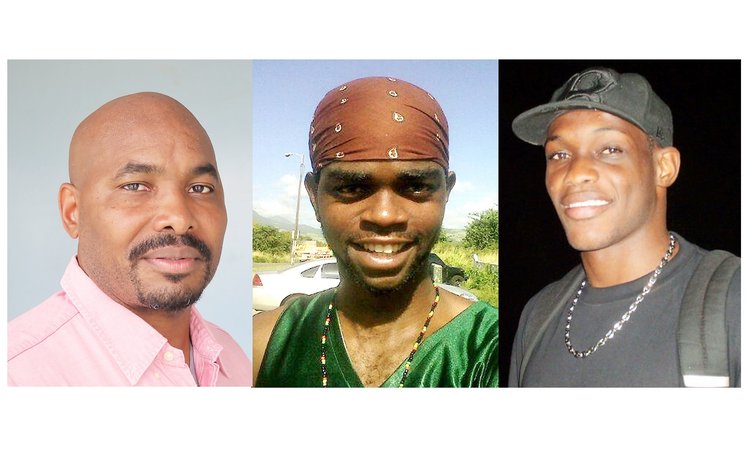 Part I of the article presented on Massacre's basketball court and two of the early Massacre-based teams which competed in DABA's National league, viz. Massacre and Tar Heels. The article continues below.

Massacre-Based Teams in DABA League (Ctd): The next team to emerge from Massacre was Massacre Blazers and they competed in Division III (Juniors), only in 1991. That team is credited with bringing home to Massacre their first DABA basketball trophy, having captured the 1991 Division III League Championship. Steve Abraham, Carlisle Green, Lindson Lynch, Andy Sylvester and others brought home the gold for the 'original' Blazers during the 100th Anniversary of the invention of the sport of basketball.

The following year (1992) saw yet another new team from Massacre, Blazers, making their debut; they played in the Intermediate Division. Steve Abraham, Carlisle Green, Lindson Lynch and Andy Sylvester, who were all founding members of Massacre Blazers were later members of Blazers II which remained active for only two seasons, saying goodbye at the end of the 1993 season.

1993 was a very important year in the history of basketball in Massacre, with two teams being fielded by the community for the first time, with Blazers Intermediates ushering into the arena a Blazers team playing in Division I.

Blazers Senior would go on to capture no less than ten (10) championships in DABA's League, Knock-out and Play-Off competitions as well as two Presidents' Cup titles and a Ball-o-rama championship. More information on Blazers Senior will be provided later in this article.

Panthers was the next team to emerge from the community, and this they did in 1996. Newspaper sports articles for that season show two teams named Panthers competing in the same division (Division II) with one coming from Eggleston and sponsored by L.A. Dupigny and the other sponsored by Caribbean Construction & Development (CCD). In 1997 CCD Panthers played in the 3rd Level Men's Division and captured the League championship in that division that year.

1997 had also seen the arrival of Bullets, which modified their name to Massacre Bullets the following year, only to revert to Bullets when they acquired a sponsor from 2000. Initially and for the next two seasons they played in the 2nd Level Men's Division, but stepped down to the 3rd Level from 2000 and remained playing at that level for several seasons (2000-2007) thereafter.

Next in Massacre's team parade was Faith who competed in at least 2006 and 2007.

Some of Massacre's teams seemed to have been inspired by the Blazers, as we saw in 2015 another team – from Massacre – with 'Blazing' as part of its name. This time it was Blazing Panthers who took to the court and played in the lower of the two men's divisions; they only competed for one season.

The most recent entry into the league from Massacre was a junior Blazers team, who registered as Blazers DI (DI = Division I or 2nd Level Men's Division).

Post-Hurricane Maria, Blazers (Senior) and Blazers DI participated in the DABA 7-SIX-7 Entertainment Mackeson National Basketball Cup competition which was staged at St. Joseph in 2018. Three years later (2021), Blazers 1 and Blazers 2 were two of the teams registered to participate in the return of the DABA National League which was to be run in a new format, but which was 'blocked' by a second wave of COVID-19 infections on the island.

Massacre Players Representing Dominica: A number of players who played with Massacre-based teams proudly represented Dominica in regional or sub-regional competitions, and at different levels.

Meanwhile, Thomas Felix was a member of Dominica's National Under-23 Team which participated in the Rencontre InterCaribéennes de Basket Tournament which was staged in Guadeloupe in 2007.