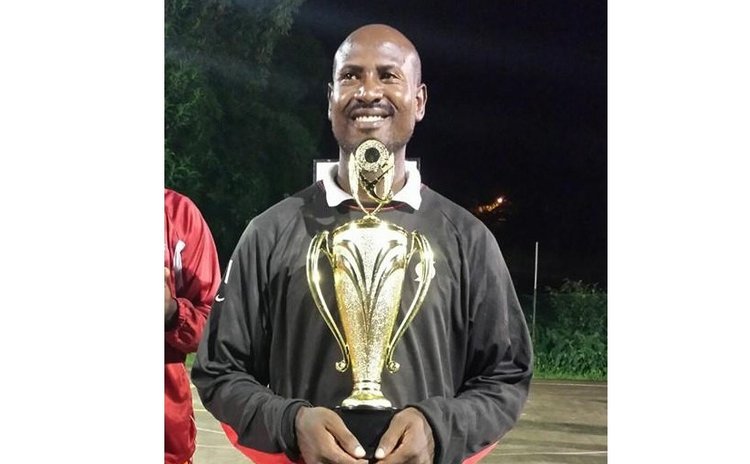 Lindson Lynch posing with one of BLAZERS' championship trophies

Part II of the article continued the presentation on the Massacre-based teams which participated in DABA's National League; these comprised Massacre, Massacre Blazers, Blazers II, Blazers Senior (commencement of their presentation), Panthers, Bullets/Massacre Bullets, Blazing Bullets, Blazing Panthers and Blazers DI. The presentation on Massacre players who represented Dominica in basketball was started. The article continues below:

Massacre Players Representing Dominica (Ctd): In 1997 the Dominica National Under-19 Basketball Team which participated in the CARICOM Under-19 Tournament in Jamaica included Gary Defoe and Jameson Lecointe of Massacre in their line-up.

Earlier that year the Under-19 Team had twice defeated Guadeloupe's Under-19 Team in Dominica, lost to a Select Guadeloupe National Team, and participated in the Windward Islands Basketball Tournament (as the second Dominica team), all in an effort at providing the Team with some exposure in their preparation for the CARICOM Tournament.

Massacre's Shiny Basketball Silverware: Four teams have so far contributed towards stocking up Massacre's basketball trophy cabinet. A Division III (Junior) team led the way and they were followed by teams competing in the senior, 2nd and 3rd Level Men's Divisions and recently the National 3x3 Competition. With their impressive collection of silverware, Blazers (Senior) is currently the second most decorated team in Dominica' basketball history, after the legendary Cardinals. Blazers also boasts of doing two '3-peats' (1995-1997, then 2013-2015), but Cardinals had done a '6-peat'.

The trophy contributors and their corresponding silverware are as follows:

Massacre's Basketball League: Massacre, like other basketball centres around the island, has organised its own "Off-Season" League. The village's first such competition was held sometime in the 1990s, under the afternoon light, and apart from the five teams from the host community that league also attracted teams from Canefield, Salisbury and St. Joseph.

The second league was staged some years later when the court was lit and improved, and attracted teams from Canefield, Mahaut, Roseau (Bath Road) and Salisbury. The roster showcased four or five teams from Massacre, including Bébé's Kids, Black Hawks, Street Ballers and Yard Boys.

Sponsors of Massacre Basketball: To date, Massacre basketball teams have benefitted from the generosity of one individual and a few corporate sponsors, some of which operated close to Massacre.

Vanderpool Blaize sponsored Massacre in 1985, followed by SAG Toyota/SAG Motors who were the first sponsors of the Blazers Senior Team; that partnership began in 1993 and continued for five more seasons until 1998. SAG also sponsored Blazers II (second division team) for the latter's one-season appearance in 1993.

On behalf of all of the sponsored Massacre teams, Jump Ball says a BIG THANK YOU to all the sponsors for helping to keep basketball alive in Massacre.